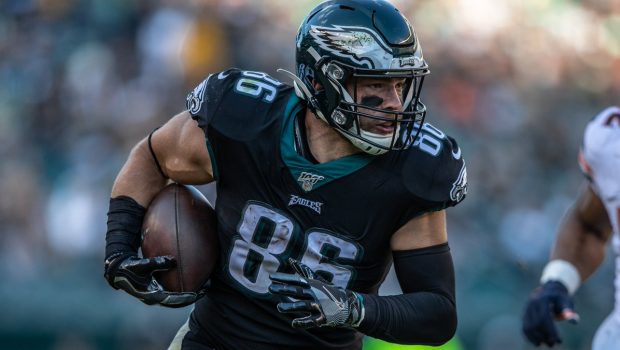 EAGLES ERTZ, WARD SHOULD BE FANTASY STARS AGAINST REDSKINS!

Since Week 9, Zach Ertz (above) averages 18.9 XFP per game and 21.3 fantasy points per game. Both numbers lead all tight ends by a sizeable margin (37% and 18%) and would rank top-three among wide receivers. Against a Washington defense that’s given up 18.1 fantasy points per game to tight ends over the last four weeks, and with the Birds’ receiving corps still reeling from injuries, Ertz is the best bet to lead the position in scoring this week.

The Eagles have just four wide receivers on their active roster, and two of them were unable to practice on yesterday. Greg Ward has seen seven or more targets in two of his last three games while running 64% of his routes from the slot over this span. Against the Redskins, who rank seventh-worst in fantasy points per game allowed to slot wide receivers, Ward is your top “desperation flex-play of the week” for teams looking for a starter off the waiver wire.