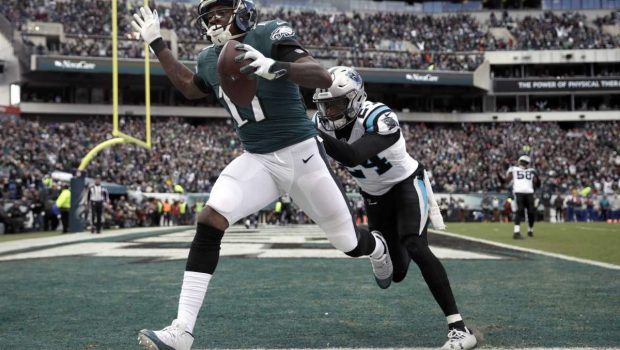 The Eagles are staring into the 3-4 abyss after yesterday’s nightmarish loss to the Carolina Panthers, 2-17 at the Linc.

But you can’t blame tight end Zach Ertz and wideout Alshon Jeffery (above).

After allowing the Panthers to score three unanswered touchdowns in the fourth quarter and turn a 17-0 deficit into a 21-17 lead in less than 11 minutes, the Eagles had one more chance to score and salvage the game.

Carson Wentz threw Jeffery a bomb. The ball hit the turf but Jeffery was interfered with while trying to make the play. The Eagles suddenly had life and were at the Panthers’ 22-yard line.

On the next play, Wentz looked for his top target, Ertz, in the end zone. But Ertz was not in the end zone and the ball was thrown to the wrong spot. Ertz turned in confusion to see safety Eric Reid undercut the pass for what was called an interception on the field. It was a crucial miscommunication.

The interception was overturned and the Eagles had another chance. But the momentum was gone after an uncharacteristic miscue. Two plays later, on third-and-2, Wentz fired a dart into the end zone to Jeffery and it was nearly intercepted. On fourth down, he looked for Jeffery again and was sacked to end the game.

“Fourth down, I saw Alshon open across the middle,” Wentz said. “As I stepped up and tried to make the throw, got hit and the ball came out. The play before, I tried to force one in there that I probably shouldn’t have.”

But in the fourth quarter, six combined targets for the two playmakers resulted in three receptions for 25 yards. The Eagles’ offense ran 13 plays and gained just two first downs while the Panthers went on to win 21-17 after trailing 17-0 with less than 10 minutes to play. When it mattered most, the Eagles’ best hands weren’t enough to win the game.

Ertz finished with nine receptions for 138 yards, the third-highest yardage total of his career. Jeffery had 88 yards on seven receptions and a touchdown.

Ertz and Jeffery were targeted 21 times. The four other players with receptions? A combined 16 times. When the plays to Ertz and Jeffery stopped working as well in the fourth quarter, the Eagles had no answer.

“I would have to look back at the film and see if there was much change,” Ertz said. “They kind of played man on the third down to Alshon. Those guys were making plays all day too like Alshon, (tight end Dallas) Goedert played extremely well, so (Wentz) is going to throw the ball to whoever is open. It is what it is.”

Jeffery was at his most electric in the first half. He converted a fourth-and-5 situation at the Carolina 25-yard line with a toe-tap catch on the sideline. It kept the drive alive and led to a field goal attempt.

On the next possession, Jeffery shook off two defenders for a 20-yard catch in the red zone. Two plays later, he caught an 11-yard touchdown. On the drive after that, he hauled in an impressive 29-yard reception on the sideline in smothering coverage.

But one play that stood out to head coach Doug Pederson came with 2:28 to play on the Eagles’ drive before the Panthers took the lead. On third-and-10 at the Eagles’ 25, Wentz fired toward Jeffery just shy of midfield. Panthers cornerback James Bradberry forced an incompletion and the Eagles punted. Pederson noted it as poor execution on an important chance.

“We had an opportunity on the third down,” Pederson said. “Alshon was wide open, and 24 (Bradberry) just came back and got a hand in there late and knocked the ball away. Otherwise, we’re on the field at that point too.”

Seven of Ertz’s nine receptions were for more than 10 yards. He made the Eagles’ only third-down conversion in the fourth quarter outside of the pass interference penalty against Jeffery.

In the second quarter, Ertz made a highlight-reel grab on the sideline for 27 yards one play after Jeffery’s. In tight coverage, he caught the ball with just his hands over the defender’s helmet and tiptoed in bounds. The drive ended with a field goal that made it 10-0 in the second quarter.

With less than four minutes left in the third quarter, Wentz rolled to his right on a second-and-8 and fired what appeared to be an ill-advised throw to Ertz in tight coverage. Ertz was on the same page of his quarterback and made the 9-yard catch for a first down. It led to a touchdown by Goedert that gave the Eagles a 17-0 lead.

Ertz and Jeffery made plays to carry the offense for most of the game. Their stats show an impressive game. But when it mattered most, the individual efforts weren’t enough to get the win.

“I just tried to make the most of it when my number was called and I thought we were pretty efficient. That’s the key stat that I look at, the efficiency,” Ertz said. “It was all for not. It really doesn’t matter. I would take zero catches for 0 yards and win the game.”