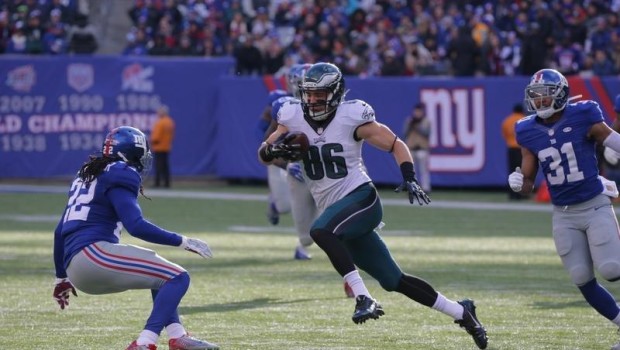 The Eagles ended the bizarre 2015 season, in which their coach Chip Kelly was thrown overboard last Tuesday night, with a 35-30 victory over the New York Giants at MetLife Stadium.

With interim coach Pat Shurmur at the helm, the Eagles’ 7-9 finish is their worst since 2012, when they went 4-12 in Andy Reid’s last year, and only the second time in the last decade that they finished under .500 and fifth time in the last 10 years that they didn’t make the playoffs.

Sam Bradford completed 30 of 38 passes for 320 yards, two touchdowns and an interception, which came off a deflection.

Zach Ertz (above) had a great game, catching 9 passes for 152 yards, while Jordan Matthews recovered nicely from an early drop to for 7 receptions for 54 yards and two touchdowns.

With the win, the Eagles will likely draft no higher than 13 overall. Now they’re stuck without a second-round draft pick, an aged offensive line that has holes at both guard spots, a defense that can’t defend the long pass and no head coach.

Otherwise, it seems the team is headed in a good direction for whoever takes over for Kelly.

There were two lead changes in the fourth quarter. It seemed the Giants would take charge, grabbing their first lead of the game when Eli Manning hit Rueben Randle for a 45-yard touchdown, which put New York up, 27-21. The play came after DeMarco Murray fumbled at the Eagles’ 45. It didn’t take long for Manning to spot Randle down the middle of the field, beating safety Walter Thurmond.

Thurmond made up for that on the Giants’ next possession, when Connor Barwin reached up and grabbed Manning’s right hand just as he was releasing a pass. The wobbler floated in the air and Thurmond scooped it up at the Eagles’ 17 and returned it 83 yards for a touchdown with 3:50 left in the third quarter.

The Eagles added to that with a 13-play, 91-yard drive that ended with Sam Bradford’s second touchdown toss to Jordan Matthews, who caught 6 passes for 48 yards—after dropping the first ball thrown to him.