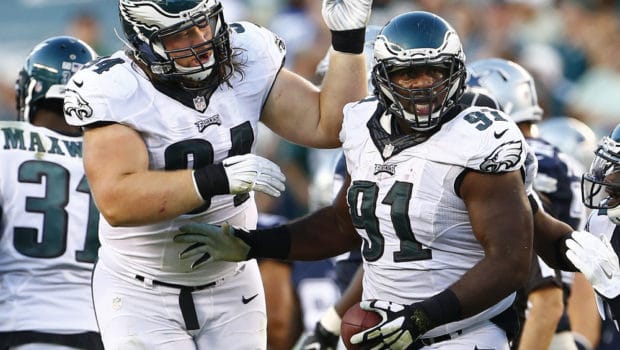 EAGLES EASILY HAVE THE BEST DEFENSIVE LINE IN THE NFC EAST

Let’s take a look at which team has the best defensive line in the NFC East:

The Eagles’ Fletcher Cox (above) is easily the best defensive lineman in the division. Bennie Logan is excellent at stuffing the run while Connor Barwin, Vinny Curry and Brandon Graham can all get to the quarterback.

The Giants splurged in free agency and the focus was on the defense. Olivier Vernon joins stalwart Jason Pierre-Paul on the line. Damon Harrison also comes over from the Jets to help solidify the defensive tackle spot.

The Redskins have veterans Ricky Jean-Francois and Chris Baker manning the defensive linemen spots and Kedric Golston in the middle. That should form a solid front line.

The Cowboys would be higher on this list in multiple positions if it weren’t for suspensions. Randy Gregory is out for 10 games, so the starters are Ryan Russell and David Irving at end with Tyron Crawford and Terrell McClain at tackle.