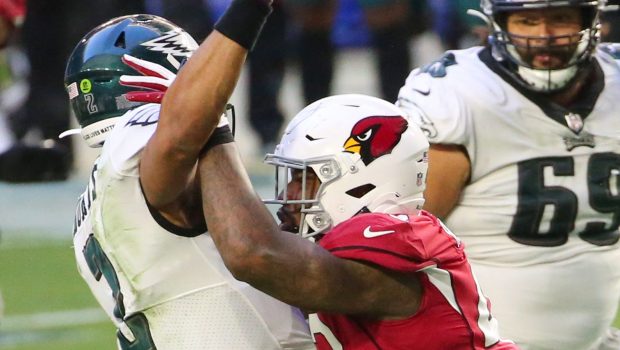 EAGLES EARN AN ‘A’ FOR SACKMASTER HAASON REDDICK SIGNING!

The Eagles got a free agent shot in the arm yesterday when they signed Haason Reddick, a first-rate edge rusher who had 11 sacks last season for Carolina.

And Eagles fans aren’t the only ones impressed by signing the Camden-born Temple alaum.

SI.com gave the Eagles an A:

The Eagles landed some pass-rushing talent to supplant the (chosen) loss of Derek Barnett in free agency.

The former situational inside linebacker turned deadly outside rusher, who played on more than 80% of the Panthers’ snaps last year, adds a different dimension for the Eagles than they’ve had previously.

In the era of simulated pressure, Reddick is athletic enough to approach the line and drift back into coverage to cloud throwing lanes.

He could easily be in for his third straight double-digit sack season.

Philadelphia was 21st in pressure percentage last season, and if the Eagles intend to continue blitzing at the paltry 16% rate they did a year ago, they’ll need a spark such as Reddick.