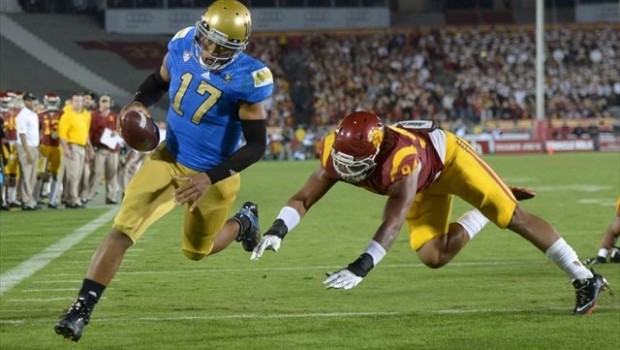 Eagles fans who watched Sunday’s conference championships came to the quick conclusion that Nick Foles does not have the talent of Russell Wilson, Aaron Rodgers, Tom Brady or Andrew Luck.

Foles is a nice QB with some potential to grow a bit, but he is not a game-changer and never will be.

So it is understandable why otherwise sane observers like Mike Missanelli, Sal Paolantonio and Randall Cunningham want the Eagles to “Do the Deal” and trade every draft pick they will have for the next three years to draft Marcus Mariota, Chip Kelly’s former QB from Oregon.

It makes perfect sense. Kelly prefers a mobile, read-option play caller, which Foles will never be, and which Mariota exemplifies.

There is one big problem:

It is never going to happen.

Yes, you will hear talk about why Mariota should be in Philly for the next four months, until the draft takes place in May.

If the Eagles really want to draft a QB this year, there are other options, players who will be available at No. 20, where the Birds will pick in the first round, and even later in the draft.

Kelly doesn’t value mobility at the position above all else. Second, by most accounts, Hundley in Round 1 would be a significant reach.

CBSSports.com’s rankings have since bumped Hundley up to the 29th best player in the draft, but previously had him as squarely a Day 2 prospect. ESPN’s Scouts Inc. service for Insiders is even less bullish on Hundley, ranking him 81st, which would put him in the third round.

Hundley did post tremendous numbers. The redshirt junior completed 67.4 percent of his passes while throwing 75 touchdowns to 25 interceptions in three seasons for the Bruins. 2014 was his best yet, with a 69.1 completion percentage and 22 scores to five picks. In addition to executing in the passing game, Hundley added 1,747 yards and 30 touchdowns on the ground.

He has a plenty of other things going for him as well. Hundley is listed at 6’3”, 226 pounds. He has a quality NFL arm. He’s said to have the work ethic necessary to succeed at the next level. Even some of the negatives in his scouting report, such as playing almost entirely in the shotgun formation, probably won’t hurt him in Kelly’s eyes.

There’s not as much division over Petty, but that’s because nobody is trying to shoehorn him into the first round, either. Rankings have the redshirt senior squarely as a Round 3 or 4 pick, which is where I believe the Eagles would feel more comfortable taking on a project.

A two-year starter for the Bears, Petty completed 62.7 percent of his passes, which is a little lower than you like to see for a college quarterback, but threw 62 touchdowns to just 10 interceptions, which indicates impressive decision making. He’s also a decent athlete, rushing for 338 yards—remember, sack yardage counts—and 21 touchdowns for his career.

Petty is listed at 6’3”, 230 pounds and has a quality NFL arm. His work ethic is said to be above reproach. And like Hundley, the knock about playing entirely from the shotgun formation probably matters little if at all to the Eagles.

There’s actually another quarterback in this draft that Kelly recruited. Bennett was at Oregon for three years, but wasn’t going to get an opportunity to play, so he transferred to Division I-AA Southeastern Louisiana where he started his junior and senior season.

The passing numbers are not very good. Bennett completed just 55.5 percent of his passes with 48 touchdowns to 22 interceptions. However, he did rush for 2,080 yards and 37 touchdowns, so he’s got the mobility part going for him. Bennett is also listed at 6’3”, 215 pounds, which is the kind of size you want to see.

There are a number of other prospects in the mix that might be worth delving into a little deeper at a later date, such as Shane Carden out of East Carolina, Garrett Grayson out of Colorado State and Sean Mannion out of Oregon State for example. However, these are all mid-to-late round flier types, and there really isn’t anybody else out there with significantly more upside.

Which is why you can see a player like Hundley becoming enticing to teams late in the first round, or Petty start creeping up draft boards. The problem is none of these guys resemble anything close to sure things. Quarterback may be a need, it may not—Foles is an enigma—but either way, this is a hard year to go searching for answers.