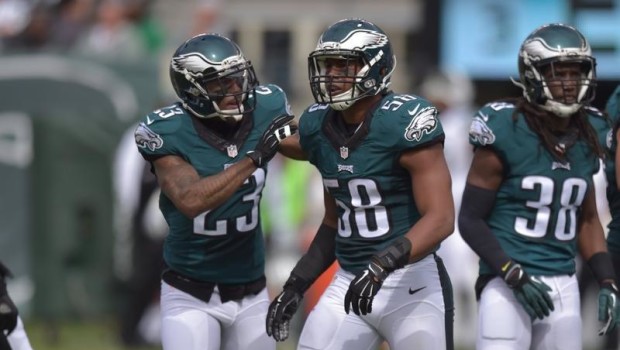 Rarely is Eagles linebacker Connor Barwin very effusive. He lets his actions do his talking.

But the play of Eagles rookies during their first win of the 2015 season got the best of Barwin:

Jordan Hicks (58 in photo above) started the game because of injuries to Mychal Kendricks and Kiko Alonso. He was credited with 10 tackles. He also recovered a fumble when Jets wide receiver Brandon Marshall attempted an ill-advised lateral.

“We were really excited about Jordan when we got him,” Eagles coach Chip Kelly said. “We talked about him being a third-down linebacker. You’re starting to see that. He’s got great coverage skills. There’s a calmness to Jordan. I don’t think anything is too big for him.”