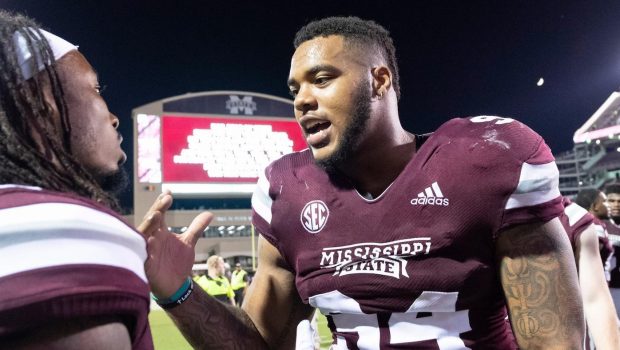 EAGLES DRAFT DT JEFFERY SIMMONS (HE’S GOT AN ACL!) IN THIS MOCK

The NFL draft is three night away — Thursday, April 25 — and the Eagles are slotted at 25.

Here’s a mock draft to chew on:

Having taken Sidney Jones in the second round two years ago despite the cornerback’s torn ACL, Howie Roseman has shown he isn’t afraid to play the long game by drafting an injured defender.

Simmons could have been in this year’s top tier of defensive linemen if not for suffering the same injury as Jones two months ago, and his value here would be sizable for an Eagles team that could use additional depth along the front four.

1. Cardinals — Kyler Murray, QB, Oklahoma: Draw your own conclusions about whether general manager Steve Keim was being sincere when he said last week that the team hasn’t made a decision on what to do with the No. 1 pick. The mystery surrounding the selection has even taken its toll on incumbent starting quarterback Josh Rosen, who called the uncertainty “annoying.” Maybe Arizona has a draft-day surprise up its sleeve, but Murray still seems like the engine Kliff Kingsbury would want to power his souped-up offense.

2. 49ers — Nick Bosa, DE, Ohio State: For all of the uncertainty still lingering at the top of the draft, San Francisco’s outlook is relatively simple: If Bosa is available, he should be John Lynch’s selection. With Dee Ford and DeForest Buckner already in place, Bosa could be the final piece for a formidable front four capable of setting the tone for the rest of the 49ers’ defense.

3. Jets — Quinnen Williams, DT, Alabama: Having broadcast his desire to trade back, general manager Mike Maccagnan can only hope that some team gets itchy to move up the order for a quarterback. Should Gang Green remain here, Williams projects as the kind of defensive staple who would maximize the team’s return with his knack for creating havoc in the backfield.

4. Raiders — Josh Allen, DE/OLB, Kentucky: Even if the Khalil Mack jokes and ridicule directed at Jon Gruden don’t stop after this selection, Allen looks to be the best available remedy for a pass rush that generated a league-worst 13 sacks in 2018. No one will confuse the consensus All-American for Mack, but he makes life difficult for quarterbacks with his speed rush, and he’s still adding moves to his arsenal.

5. Buccaneers — Devin White, LB, LSU: Tampa Bay might be hoping for one of the top linemen to fall here, as the pass rush would stand to benefit from an edge threat opposite Jason Pierre-Paul or a replacement for Gerald McCoy, who still could be cut. White, however, shouldn’t be seen as merely a consolation prize, as his range and playmaking ability might prove instructive for a defense that has looked adrift.

6. Giants — Daniel Jones, QB, Duke: If Dave Gettleman has identified a first-round passer he’s comfortable crowning as Eli Manning’s successor, he shouldn’t risk having that quarterback snapped up between this point and the Giants’ second pick at No. 17. Though the move still might come as a surprise on draft night, speculation tying Jones to Big Blue has amplified recently. Jones could be a quick-triggered distributor for the seemingly Saquon Barkley-centered offense.

7. Jaguars — T.J. Hockenson, TE, Iowa: Nick Foles alone won’t resuscitate Jacksonville’s decrepit offense. In adding Hockenson, the Jaguars would give their new starting quarterback a reliable and dynamic target who also is adept at opening holes in the ground game.

8. Lions — Montez Sweat, DE, Mississippi State: Could Sweat’s decision not to attend the draft be a harbinger for a tumble? The two-time all-Southeastern Conference selection explained his change of heart by saying he wanted to be with family in Georgia, but a heart condition flagged at the combine could give teams pause. If Detroit is comfortable with his medical outlook, Sweat would make a fitting pass-rush partner for Patriots expat Trey Flowers.

10. Broncos — Drew Lock, QB, Missouri: One year after the Ravens took Lamar Jackson as his heir, Joe Flacco could once again be left looking over his shoulder, this time with his new team in Denver. Lock’s strong arm and audacious playing style could entrance John Elway, who shouldn’t be satisfied with another short-term patch at quarterback.

11. Bengals — Dwayne Haskins, QB, Ohio State: Is Andy Dalton about to get the Flacco treatment? If Cincinnati wants to follow the Rams’ blueprint with Sean McVay protégé Zac Taylor, the franchise can’t expect its first-year coach to scrape by with a veteran quarterback who tops out as serviceable. Haskins, who wouldn’t have to be rushed into action after his lone year as a starter at Ohio State, might be the Bengals’ best bet for catching up to the rest of the AFC North in the long term.

12. Packers — Noah Fant, TE, Iowa: Don’t be fooled by Green Bay’s historical aversion to investing top picks at this position; tight ends will play a crucial role in new coach Matt LaFleur’s offense. Though this might seem high for Fant, the mismatch-creating target would help diversify the passing game.

13. Dolphins — Jawaan Taylor, OT, Florida: Taking Taylor as a bookend opposite Laremy Tunsil would lay a solid foundation on which to begin a rebuild. And if fans are unsatisfied with Ryan Fitzpatrick as their starting quarterback for 2019, well … let them eat cake.

14. Falcons — Jonah Williams, OT, Alabama: Ty Sambrailo won’t cut it as the starting right tackle for an Atlanta team that has sent a message by reshuffling its line elsewhere. Williams, perhaps the steadiest prospect in this draft, would be an upgrade.

15. Redskins — D.K. Metcalf, WR, Mississippi: With all of the top quarterbacks off the board, Washington might have to wait to find a potential replacement for Alex Smith. The aerial attack still could get a significant boost from Metcalf, whose deep speed and catch radius would create downfield opportunities for an otherwise conservative passing game.

16. Panthers — Andre Dillard, OT, Washington State: Carolina hasn’t been able to find a consistent blindside protector for Cam Newton since Jordan Gross’ retirement in 2013, and neither Taylor Moton nor Daryl Williams is a natural fit to move over from right tackle. Dillard’s extensive experience in pass protection could afford Newton the stability he deserves.

17. Giants (from Browns) — Rashan Gary, DE, Michigan: Despite his tantalizing tools, Gary might be a difficult project for NFL teams figuring out how to translate his potential into pass-rushing production, which he was short on (10 1/2 sacks in three years) with the Wolverines. If he’s available at this juncture, though, the Giants might be overjoyed by adding the New Jersey product to a lackluster unit that traded away its top sack artist in Olivier Vernon.

18. Vikings — Cody Ford, OT/G, Oklahoma: Landing one of the top offensive tackles on the board and moving Riley Reiff to guard might be the optimal route, but all of them might be accounted for by this point. Ford, however, could step in as a Day 1 starter on the inside and be a bully in the run game.

19. Titans — Christian Wilkins, DT, Clemson: Revving up the pass rush is undoubtedly a priority for Tennessee, and the fluid and savvy Wilkins sizes up as a disruptive penetrator who would pair well with Jurrell Casey.

20. Steelers — Devin Bush, LB, Michigan: Given the wide-ranging effect Bush’s athleticism could have on the Steelers’ defense, general manager Kevin Colbert ought to make this pick in less than the 4.43 seconds it took the linebacker to run his 40-yard dash.

21. Seahawks — Brian Burns, DE, Florida State: Projecting Seattle’s pick seems like something of a fool’s errand, as trading back from this spot would be the easiest way for John Schneider to add more picks to his league-low total of four. Even if the Seahawks keep Frank Clark, Burns is the kind of explosive edge rusher who could make it difficult to part with this selection if he’s available.

22. Ravens — Marquise Brown, WR, Oklahoma: So the 5-9, 166-pounder isn’t what one might envision when John Harbaugh explained his affinity for “rough guys” at receiver. Brown could be the big-play threat essential to Lamar Jackson’s development while providing a spark for the offense when the ground game stalls.

23. Texans — Byron Murphy, CB, Washington: Waiting to address an offensive line that surrendered a league-high 62 sacks might seem negligent, but Murphy could be an important pickup for a secondary that needs to be upgraded if Houston is to compete with the AFC’s elite.

24. Raiders (from Bears) — Greedy Williams, CB, LSU: The next step for Oakland after finding a premier pass rush should be to nab a coverage maven opposite Gareon Conley, and Williams fits the bill with his impressive length, speed and fluidity.

28. Chargers — Jerry Tillery, DT, Notre Dame: The Bolts look ready to make a push for the AFC crown, but they’ll need to fill a void at defensive tackle. Tillery’s size and power will present plenty of challenges for offensive lines also trying to account for Joey Bosa and Melvin Ingram on the outside.

30. Packers (from Saints) — Dalton Risner, OT/G, Kansas State: A potential successor to Bryan Bulaga at right tackle, Risner also could be a fixture for Green Bay at guard.

31. Rams — Garrett Bradbury, C, North Carolina State: Finding a guard or center to replace starters Rodger Saffold and John Sullivan should be high on the Rams’ list of priorities, and Bradbury’s skill set is tailor-made for Sean McVay’s zone-blocking scheme.

32. Patriots — A.J. Brown, WR, Mississippi: Demaryius Thomas’ one-year dealdoesn’t amount to much more than a flier for a New England team in need of receiving reinforcements. Still somewhat of an unknown entity as a downfield target, Brown should find his place in New England’s passing attack with his penchant for dominating in the short area.