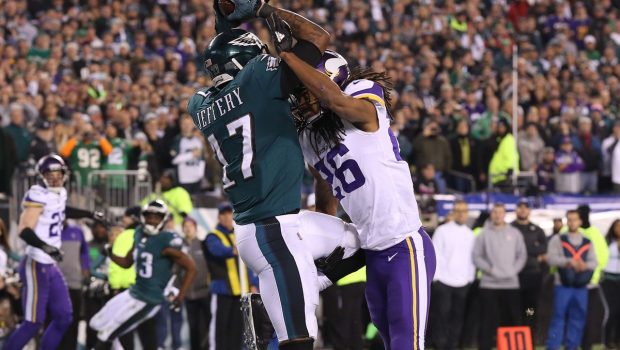 As you may have heard, the NFL draft is only five days away, and the Eagles have the 25th pick in the first round.

Here’s an idea from ESPN’s Bill Barnwell about how they can solve their secondary problem with a quick trade to move up:

The Eagles gave cornerback Ronald Darby a one-year, $6.5 million deal this offseason to come back, but Howie Roseman is one of the most creative and aggressive general managers in the league when it comes to acquiring talent at positions of need.

The Eagles have possible options at the position with the likes of Jalen Mills and Sidney Jones, but they need as much help at corner as possible.

In this deal, he goes after Waynes, who is on what amounts to a one-year deal for $9.1 million on a Vikings team already deep at cornerback and unlikely to retain him next year in free agency.

Minnesota can move up and use yet another first-round pick at the position to supplement Xavier Rhodes and Mike Hughes, who would be promoted to the starting lineup with Waynes’ departure.

The Eagles would move down 25 spots in the draft, but they would likely come away with a compensatory pick for Waynes in free agency next season.