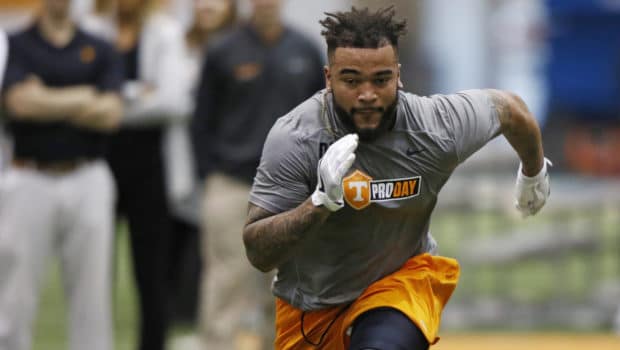 Eagles talent-spotter Joe Douglas had high praise for Derek Barnett, which one might expect since he just chose him as the first pick in last night’s draft.

But Douglas knows whereof he speaks, since he came from Baltimore:

“I did make a comparison to him and Terrell [Suggs]. Both guys didn’t test outrageously at the Combine setting. but both are highly productive players,” Douglas said. “High toughness. Great people. His production is unmatched, breaking a Hall-of-Fame player (Reggie White) record at Tennessee.

“Derek has an excellent ability to bend at the top and finish,” Douglas said. “You are getting a guy that knows how to finish at the top of the rush…he has very strong hands.”

Barnett broke Tennessee’s all-time sack record held by Reggie White, totaling 33 sacks during his college career. Barnett was very consistent during his time at Tennessee, finishing with at least nine sacks in each of his three seasons, and at least 10 sacks in his final two years.

Suggs has 114.5 sacks in 14 seasons in the NFL. He has been one of the best pass rushers in the NFL during his time in the league.

The Eagles feel Barnett has some of the same qualities of Sugg and other elite pass rushers in the NFL.

“We were really excited to get Derek. Highest rated player on our board,” Eagles big boss Howie Roseman said. “We are always going to build along the line. He fits our scheme. He fits the culture we are trying to build.”