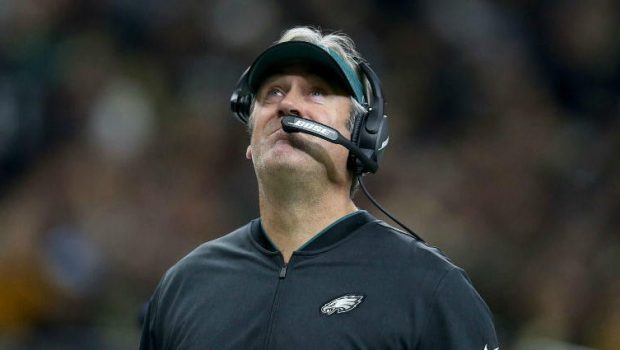 EAGLES DOUGIE P SEES NO FINGER-POINTING: LOOK IN THE MIRROR!

“You might take Malcolm’s comments as finger pointing or Kelce’s, it’s not,” Eagles coach Doug Pederson told reporters yesterday. “They’re talking about themselves, too, right? They hold themselves accountable. I hold myself accountable, and then collectively we can do that as a group. I think that’s something that this team has really — I’ve seen that, and it’s hard to say that and maybe to get you to believe it, but I’ve seen it every single day with this group that comes in here and works their tail off to try to win a football game, as hard as that is in this league.”

If Doug Pederson thinks Malcolm Jenkins and Jason Kelce aren’t pointing fingers as the Eagles season is flushing down the drain he ought to look in the mirror!

In the past week, Eagles center Kelce and safety Jenkins have spoken publicly about issues with accountability and effort among the defending Super Bowl champions.

Most would regard the remarks as an effort to point fingers at teammates.

Pederson doesn’t see it that way.

“They’re disappointed,” Pederson said. “We’re all disappointed. The season has not gone the way we anticipated coming out of training camp. So we continue to fight every single day in practice, come to work every single day, try to get better, put a great game plan together in all three phases and build towards Sunday. When it doesn’t go your way and then you have a game like that, it just — there’s going to be a lot of — which I have not seen, and this is one of the things I love about this football team, there isn’t a ton of finger pointing.”

Pederson seems to think finger pointing happens only when specific names are named. Still, there seems to be a disconnect between the assessments of Kelce/Jenkins and Pederson. And for good reason; Pederson knows it ultimately reflects poorly on him if the players aren’t accountability and/or lack effort.