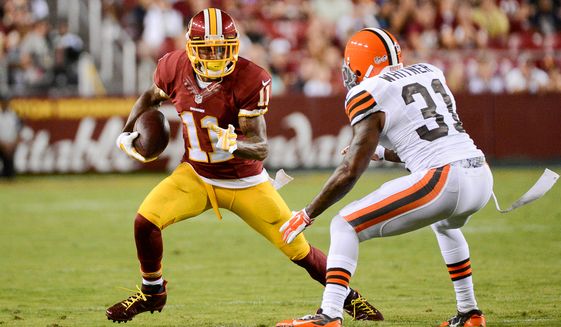 A shoulder injury make keep Jackson from playing Sunday against the Birds.

Thanks again to the great Mark Eckel of the Trenton Times for enlightening us beyond the Philly mainstream bubble, this time on what the rest of the league thinks of the Eagles without DeSean Jackson:

Do the Eagles miss the speed and game-breaking abilities of Pro-Bowl wide receiver DeSean Jackson?

Not according to an executive in personnel for a NFC team who went almost as far as to say the team is better off without him.

“Do they miss Jackson?’’ the personnel man asked back. “Does it look like they miss him? They’ve scored 30 points in both of their games. No, I don’t think they miss him. Unless he was going to play linebacker for them, I think they’re fine without him.’’

Jackson, now with the Washington Redskins, suffered a shoulder injury last Sunday in his team’s win over Jacksonville and is listed as day-to-day. If healthy, he will come back to Lincoln Financial Field this Sunday when the Eagles host his new team in a NFC East match-up.

In his first and only season in Eagles head coach Chip Kelly’s offense, Jackson put up the best numbers of his six-year career with career highs in receptions (82), receiving yards (1,332) and touchdowns (9). He was released this offseason — for what Kelly termed “a football decision — the same day a NJ.com story reported Jackson’s association with gang members and quoted an Eagles source as saying he wasn’t a good influence on younger players.

Further reports had Jackson coming late to, or missing, meetings and not seeing eye-to-eye with Kelly. During a late-season loss to the Minnesota Vikings, in which Jackson caught 10 passes for 195 yards, he was seen having an argument on the sidelines with wide receivers coach Bob Bicknell.

In Jackson’s absence, Jeremy Maclin is the Eagles leading wide receiver after two games, with eight catches for 142 yards. Riley Cooper has five catches for just 37 yards and rookie Jordan Matthews has three catches for 54 yards.

“The thing is, from what I’ve seen of that offense, you don’t need a true star receiver,’’ the executive continued. “They’re going to spread it out and use everyone, go to the hot guy. They have Maclin, Cooper; the rookie (Matthews) looks like he’s going to make plays. And that tight end (Zach) Ertz is going to make a lot of plays. Plus they have two backs in (LeSean) McCoy and now (Darren) Sproles who are going to catch the ball. My God, look at what Sproles has done for them already.’’

Sproles, with 11 catches for 166 yards and McCoy, with 10catches for 64 yards, are the Eagles two leading receivers, while Ertz, the second-year tight end, has seven catches for 163 yards.

“Now, don’t get me wrong, any team can use a deep threat and that’s what (Jackson) is,’’ the personnel man said. “He can stretch the field for sure on you. But I wasn’t in that locker room. I wasn’t in their meeting room.I don’t know what happened there. They made the decision they made and they’re living with it; and like I said they’re scoring 30 points a game, so it’s hard to say they miss him.’’