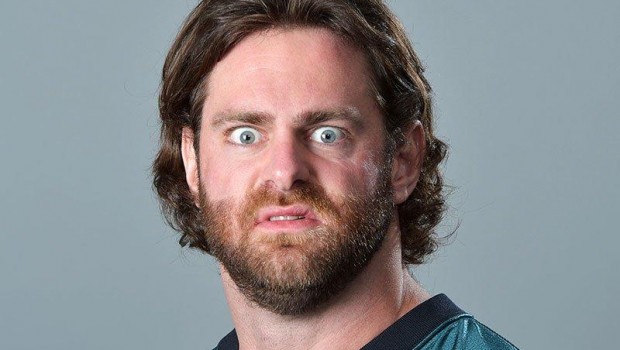 The next time Eagles guard Evan Mathis sees Chip Kelly or any of his former mates it will be on an NFL field — if another team signs him, that is.

Mathis didn’t get a new contract from the Eagles. He’ll now have a chance to get one elsewhere.

The Eagles have released the 11-year veteran only two days after word surfaced of his unhappiness with the team’s decision to rescind an offer from 2014 to pump up the back end of his contract.

A third-round pick of the Panthers in 2005, the 33-year-old Pro Bowler becomes a free agent. He can sign with any team.

Mathis joined the Eagles in 2011, qualifying for the Pro Bowl in each of the last two seasons. The move suggests that Eagles could find no trade partner for Mathis, who was under contract through 2016.

Mathis contends that the team offered an upgrade to his deal a year ago, and that the team pulled the offer from the table, explaining that, because Howie Boy Roseman no longer is the general manager, the offer is no longer valid.

The only question left in the Evan Mathis-Chip Kelly stare-down is:

Mathis, signed as a street free agent by the team in 2011, became only the organization’s third Pro Bowl guard since the Super Bowl Era — Jermane Mayberry and Shawn Andrews were the others.

After failed stints in Carolina, Miami and Cincinnati where he was a full-time starter for just one of seven years, Mathis found the perfect home with the Eagles where in years nine and 10 he became a Pro Bowl player.

In 2012 the two sides consummated a 5-year, $25 million deal, which for all intents and purposes was a lifetime agreement since Mathis was 31 at the time and would be 36 when the contract expired.

Mathis, after his first Pro Bowl in 2013, decided he wanted more money. He made a plea to Eagles’ management, complained publicly a bit, but when push came to shove he showed up when it counted.

That could still be the case. We’ll know in a less than a week when the team opens a mandatory minicamp, Tuesday.

Mathis has skipped the team’s three weeks of OTAs, which are voluntary, not subject to fines for missing and in the words of head coach Chip Kelly not all that important for offensive linemen, especially 10-year veteran offensive linemen.

“Defensive line is the same thing. Usually those two positions are the ones that really, when we get into training camp and get pads on, they can start pushing and moving guys in terms of that direction.”

So Mathis hasn’t missed much. Although if he’s trying to make a point, he’s actually missing it.

Kelly hasn’t said anything, except that the team granted his agent’s wish to seek a trade and the team hasn’t gotten an offer.

Asked if the team would miss Mathis, Peters told McManus, “No, I mean not really.”

Ertz, in the same story, quoted his old college coach, Jim Harbaugh, saying about Mathis, “out of sight, out of mind.”

If Mathis returns, and it’s probably 50-50 at this point, he might have some explaining to do. If he doesn’t, both he and the Eagles could end up losing. The team doesn’t have a guard on the roster as good; and it’s doubtful another team is going to pay him the $5.5 million he’s due this season.