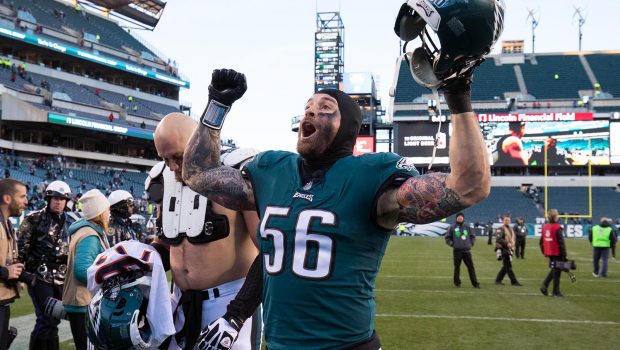 EAGLES DOGS TO MAKE PLAYOFFS, BEARS TO GET A BYE: THAT’S WHY THEY PLAY THE GAMES!

The Eagles pissed away a lot of games this season — Bucs, Panthers just to name two.

But they still have a shot at the playoffs.

Nick Foles leading the Eagles to the postseason is a low-probability event; FiveThirtyEight gives them a 28 percent chance of making the playoffs.

If he does manage to get them in and win two or more games, then he will reinforce his status as a football god.

Instead of worrying about who starts next year (it will be Wentz), we should enjoy another year of a wacky, fun playoff push by Foles.

The Bears have a slight chance — 7 percent, according to FiveThirtyEight — of getting a bye, which would occur if they beat the Vikings and if the Rams lose to the Niners. So it makes sense that Chicago will have an eye on the Rams result and might be cautious with their starters’ playing time:

If the Bears see that the Rams are on their way to a win and pull their starters, that would lead to a much easier path for the Vikings, who face a win-and-in scenario.

If the Rams do clinch the bye, then the Bears will face either the Vikings or the Eagles in the wild-card game.

There’s an argument that the Vikings might be easier to handle than this strange, mystical Eagles team that can’t seem to lose. It’s one of the strangest scenarios I can remember for a team in Week 17. It might be the weirdest thing on Sunday — and remember, this is a day with a Titans-Colts play-in game, a hot Browns team threatening to keep a good Ravens team out of the playoffs, and Jason Garrett having already clinched a playoff spot.