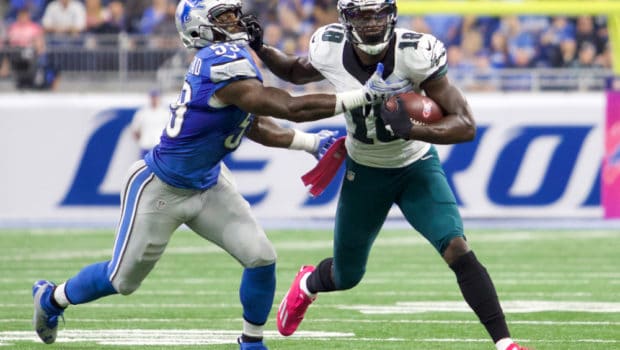 EAGLES’ DGB IS THE GO-TO WIDE RECEIVER WE HAVE BEEN LOOKING FOR!

Dorial Green-Beckham hit linebacker Tahir Whitehead with a powerful stiff arm two weeks ago on third down in Detroit. Whitehead could only watch from the ground as Green-Beckham ran for the first down and nearly scored a touchdown.

DGB’s size and strength is something the Eagles have been searching for at the receiver position for a long time. Though the team acquired the wide receiver late in the preseason, he now has a full understanding of the playbook and his responsibilities.

“He’s really done a nice job here in the last few games [and] last few weeks of understanding what we’re asking him to do,” Pederson said yesterday. “We are moving him a little bit more around in formations, but still trying to keep it to one position for him.”

“Utilizing his strength; I think he’s a tremendous slant runner. I think he can run those deeper in-routes, things like that, and utilize his height and strength in the red zone a little bit more. That’s him, and that’s the type of player that he is.”

Despite his 6-5 size, Green-Beckham hasn’t been targeted in the red zone very frequently this season. On the positive side, his snaps have been increasing. He played 52 percent of snaps against the Lions. That number jumped to 81 percent against Washington last week.

“We see it every time he gets the ball in his hands; he’s hard to tackle. He’s a big man who can run fast,” offensive coordinator Frank Reich said on Thursday. “He’s gaining more and more confidence. He’s another guy that when you sit down, you say, ‘How do we continue to get him the ball more and more?’ Without a doubt, he’s a big-play guy.”

It’s apparent that the Eagles receivers have struggled to get separation this season. They need a big-play threat desperately and as the season continues Dorial Green-Beckham may just become that player.