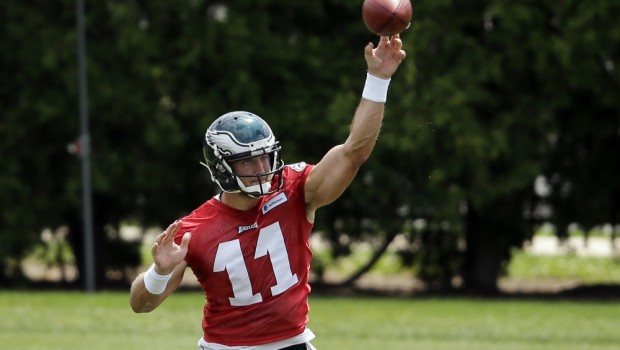 EAGLES DEPTH CHART: TEBOW AT NO. 4 — WILL HE PLAY TOMORROW?

When goofball talker Howard Eskin asked Eagles Supreme Leader the legitimate question about why Tim Tebow is No. 4 on the Birds’ depth chart, Kelly waved it away with:

Which it true. The Eagles PR guy technically puts it out, but nothing he does has not been approved by Kelly.

The Eagles signed Tebow this offseason and Kelly has made it clear that the former Heisman Trophy winner will remain at quarterback, despite struggling at the position throughout his NFL career.

On Friday, the Eagles announced its first unofficial depth chart and Tebow was indeed listed at quarterback — behind Sam Bradford, Mark Sanchez and Matt Barkley.

In general, training camp depth charts mean little because a lot can change in four preseason games. That said, barring injury, it’s not unreasonable to see the Eagles head into the regular season with Bradford under center and Sanchez and Barkley behind him. Which would put Tebow on the wrong side of the roster bubble, a fate he previously met during the 2013 preseason when the Patriots released him (Tebow was out of football in 2014).

“He’s not taking my reps on the field,” Barkley said of Tebow during OTAs in late May. “He’s an arm we need for the team. … Tim’s just one of us. He’s trying to make the team just like we all are. It hasn’t affected my approach to how I feel the team thinks of me or how I’m going out to compete every day.”

In theory, Tebow does offer something the other Eagles’ quarterbacks don’t: a capable two-point specialist, which could come in handy in light of the offseason rules changes regarding extra points. Except that we may have overblown Tebow’s goal-line value:

But Tebow hasn’t played in a regular-season game since 2012 and maybe he’s a different player than the one we saw then. That’s certainly what the Eagles’ new vice president of player personnel Ed Marynowitz said after the team signed him.

“We worked him out and we saw improvement from the last time we saw him, had exposure to him live when we played New England when they practice here,” Marynowitz said in April. “When we worked him out, we saw a great deal of improvement with him.”

And on Sunday, when the Eagles face the Colts, we’ll get to see just how much Tebow’s improved — assuming he gets on the field.