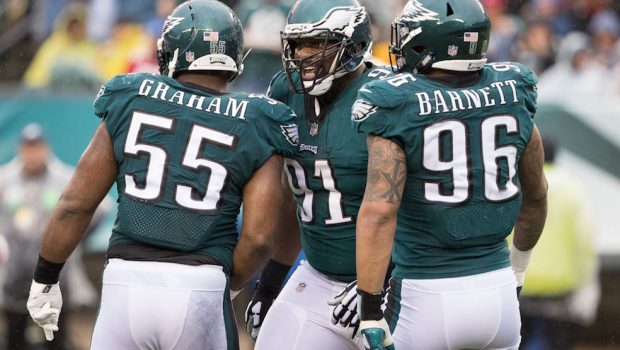 EAGLES DEFENSIVE LINE IS ONLY REASON PLAYOFFS ARE IN SIGHT!

Where would the 2-4-1 Eagles be without their superb defensive line?

Nowhere is the correct answer.

Only the Buccaneers and Steelers have more sacks on the year than the Birds. And they’re doing that with the sixth-lowest blitz rate in the NFL, too.

They create pressure routinely without having to send an extra rusher. And they’re even better at disrupting the quarterback than Washington.

A lot of the pass rush comes from the edges, where defensive coordinator Jim Schwartz has a three-headed monster of Brandon Graham, Derek Barnett, and Josh Sweat. Together, those three make up 12.5 of the Eagles’ 24 total sacks. Graham leads the team with six sacks (third-most in the NFL), and is sixth in the NFL in pass rush win rate for edge rushers; similarly, the Eagles as a whole are fifth in team pass rush win rate, winning at a 52% rate.

As good as Philly’s edge rushers are, though, their interior defensive line is also very talented. Fletcher Cox has been a force to be reckoned with for years, and naturally receives a lot of double-teams. Malik Jackson and Javon Hargrave are two powerful disruptors as well, and they’ve essentially rotated with each other next to Cox to create a really tough interior in the trenches. Going up against rookie Tyler Biadasz, and Zack Martin coming off a missed game last week, will test this offensive line in a big way.