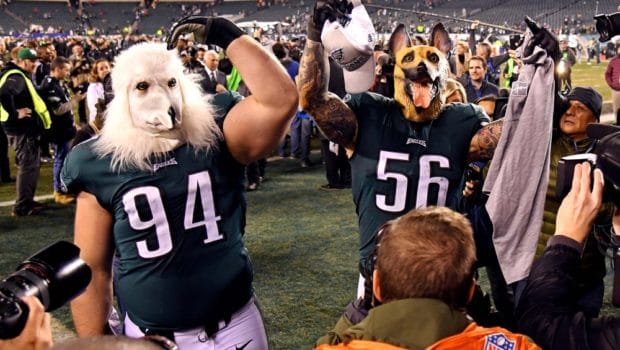 EAGLES’ DEFENSE WILL TEE OFF ON PATS AND BRADY IN THE SUPE!

I don’t know about you, but the Patriots didn’t look like Vince Lombardi’s Green Packers against the Jags last Sunday.

They appeared easy to score on and their offensive line was just adequate.

Everyone can tell you how to beat Tom Brady: Pressure him up the middle and lock down his receivers in man coverage.

Actually pulling it off is nearly impossible to do because (1) dominant interior pass rushers are hard to find and (2) Brady is too smart to blitz, so it’s up to the front four to get pressure on its own.

If there is a defense that can go toe-to-toe with Brady for a full 60 minutes, it resides in Philly.

Fletcher Cox is an absolute stud at defensive tackle. Timmy Jernigan is a monster in his own right. And the Eagles are loaded at defensive end with Brandon Graham, Vinny Curry, Chris Long and Derek Barnett.

The linebacking corps can run with tight ends and backs and the secondary has gotten better and better as the year has gone on.