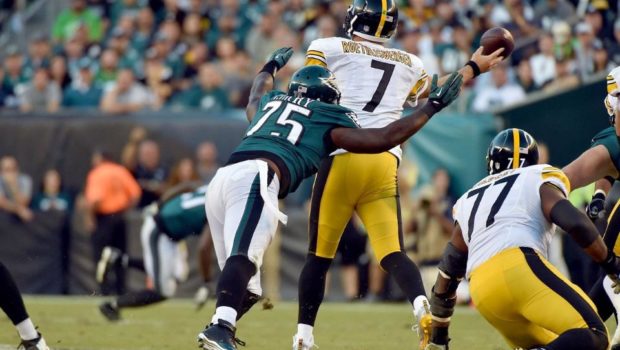 EAGLES’ DEFENSE SHOWS WHY IT’S NO LONGER A SECRET!

The Eagles sacked Big Ben four times in yesterday’s 34-3 win over the Steelers.

Forget the Eagles’ offense that threw 34 points up on the board against the Steelers yesterday.

The defense only allowed 3!

Pittsburgh was a preseason Super Bowl favorite because of an offense too mighty and explosive to contain. And what happened here Sunday?

“Sure enough,” Eagles defensive end Brandon Graham said, “we shut them down.”

A lot changed this offseason in Philly, and much of the focus when examining that change has locked in on the offense.

Gone were coach Chip Kelly and his high-speed, who-cares-about-time-of-possession ways. In came new coach Doug Pederson, himself a first-time head coach with a background in offense. But Pederson knew he needed an experienced hand to run his defense and he selected Jim Schwartz, the former Lions head coach who’d had successful stints as a defensive coordinator in places like Tennessee and Buffalo.

Schwartz’s defense is built around a 4-3 front, which was nice because the players in the Eagles’ front seven always seemed like they fit a 4-3 better than they fit Kelly’s 3-4. So Schwartz had plenty with which to work. The front office set about getting contract extensions in place for some of the building blocks, such as safety Malcolm Jenkins and defensive linemen Fletcher Cox and Vinny Curry. And away they went.

“When this coaching staff came in, they told us, ‘We’re going to give you the tools you guys need to own this defense. You guys need to take it over,'” cornerback Nolan Carroll said. “That’s a great feeling as players and I think you see the results.”

The results now include a thorough smothering of Roethlisberger and a shell-shocked Steelers offense. The Birds held Pittsburgh to 251 total yards. The Steelers averaged 395 yards per game last year and 406 for the first two weeks of this season.

“That’s not how we play,” Steelers center Maurkice Pouncey said.

But if this is how the Eagles play defense with Schwartz as their coordinator, their chances of building on their surprising 3-0 start are better than you might think. They look shaky at cornerback, sure. But Jenkins had a whopper of a game Sunday and helps out his buddies in the secondary. And what they’re able to do in the front seven around Cox and a deep group of defensive linemen is the key to the whole thing. They hit Roethlisberger eight times, sacked him four times and kept him from getting comfortable at any point in the game.

“We knew what they wanted to do,” linebacker Jordan Hicks said. “They want to move their quarterback up in that pocket and find Antonio down the field. So we just tried to suffocate Big Ben and not let them hit that big play.”

These Eagles don’t blitz much. Schwartz likes to try to generate pressure with just that front four. But they do change up the looks. Graham can move inside and match up against guards, and he can bounce back out and rush from that “Wide-9” look on the edge. Defensive tackle Bennie Logan is a monster against the run, as evidenced by Williams’ 21 yards on eight carries in this one. And Cox … Cox is a $100 million superstar who can destroy the pocket from the interior. Together, they’re leading a group that has allowed 274.3 yards and nine points per game through three weeks of this young season.

“We’ve got a bunch of leaders on that defense, and the coaches trust us,” Cox said. “It’s all about growing and being hard on each other.”

The first two games were against the Browns and the Bears — hardly two of the league’s offensive juggernauts. But this one, against this Pittsburgh team, is the one that will get everyone’s attention. This wasn’t supposed to happen. The Eagles head into their ultra-early bye week 3-0, in first place in a division in which many thought they’d finish last, feeling fantastic about their rookie quarterback and a defense that’s flat-out revived.

The Eagles finished last in the league all three years of Kelly’s tenure in offensive time of possession — averaging just 26:23 per game with the ball in their hands. That means no team’s defense spent more time on the field the past three years than the Eagles’ defense. This year, the Eagles lead the league in time of possession at an average of 36:47 per game. That’s an average of 10:24 less per game that the defense has to be on the field. And the players on that side of the ball are paying it back with performance.

“Keeping everybody fresh is important, because we’re able to fly around and play with that energy all four quarters, and I think you’re seeing that,” Graham said. “We’re improved. We’ve gotten better. And today we stopped a good team. A great team.”

Keep playing defense the way they have so far, and who knows? These upstart Eagles might have a chance to become one of those themselves before too long.