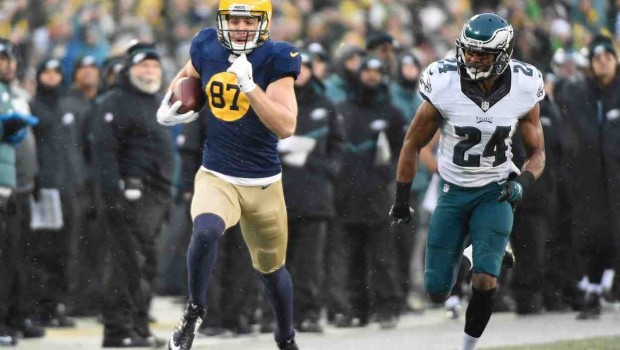 Jordy Nelson and all the Packers took Fletcher to school yesterday.

So, what should we make of the Eagles’ defense?

A week ago coordinator Billy Davis was regarded as an oracle because of the way his charges shut down the Panthers, sacking QB Cam Newton nine times.

Yesterday, Davis and his defense seemed to revert to the preseason perception that they were in over their heads.

They sure were against a great offense like Aaron Rodgers and the Green Bay Packers, who whipped the Birds 53-20.

Cornerback Bradley Fletcher seemed to be beaten on every play. Why was the only average Fletcher in single coverage against the Packers’ Jordy Nelson, Randall Cobb and rookie Davante Adams?

Davis was outcoached and by Packers head coach Mike McCarthy almost from the first play of the game.

The same defense that allowed Nate Allen to be matched up Arizona Cardinals’ John Brown for a game-winning 75-yard touchdown a few weeks ago, was manhandled all day by Rodgers, his receivers and the Packers’ game plan.

You couldn’t expect the Eagles undermanned players to match up well. You kind of thought their coaches might have had a better plan.