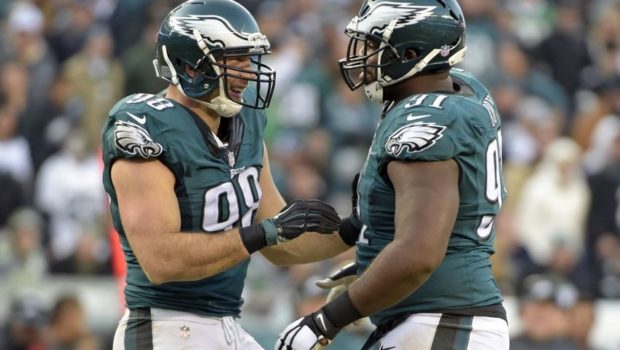 Connor Barwin and Fletcher Cox are the studs.

It is an article of faith among Eagles fans that the defense in 2016 will be much-improved.

First, woeful Billy Davis, who seemed overwhelmed by the job, has been replaced by rock-solid Jim Schwartz.

And second, big boss Howie Boy Roseman locked up much of the unit’s best players.

Defensive tackle Fletcher Cox’s importance to the Eagles was underlined with the six-year, $102 million deal he signed last week, one which will end up realistically paying him $63.4 million over the next four seasons.

Schwartz has built his defenses around devastating interior linemen such as Albert Haynesworth (Tennessee), Ndamukong Suh (Detroit) and Marcell Dareus (Buffalo), and Cox is next in that line of dominant disruptors.

Defensive end Connor Barwin is one of the most versatile defenders in the league, capable of contributing as an excellent pass-rusher and an above-average cover linebacker at different times, but again, there’s a drop-off between those two and the rest of the defensive roster.