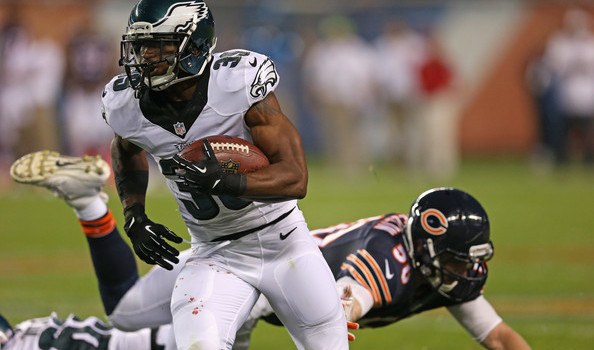 Matthew Tucker, who has gotten his share of carries during practice in the absence of Chris Polk who is sidelined with a hamstring injury, shined in the Eagles 34-28 loss to the Bears at Soldier Field.

The TCU product rushed for 40 yards and two touchdowns on eight carries as the powerful running back showed himself more than capable of thriving in Chip Kelly’s zone-read run based scheme.

The 6’1, 227-pound Tucker lost a fumble and left the game early with what the Eagles deemed a hamstring injury but his performance went a long way towards shoring up a roster spot that very much is in doubt.

Polk hasn’t taken a snap during training camp due to a hamstring injury but last season scored three touchdowns while rushing for 98 yards on just 11 carries.

Depth at the position will be critical for the Eagles under Kelly who would like to see LeSean McCoy shoulder a lighter load than the career high 314 carries in 2013, but still run the ball more than most teams across the league.

In Kelly’s first season the Eagles rushed the ball 500 times, so at a crowded position that includes the league’s leading rusher in McCoy, Darren Sproles and Polk, there certainly could be some scraps remaining for Tucker to get a handful of carries this season, especially if he can replicate his success from Friday’s game.

In all likelihood Tucker is battling with rookie David Fluellen for the final running back spot on the roster and Fluellen was equally impressive against the Bears Friday.

The Toledo product carried the ball six times for 26 yards and was on the receiving end of a Matt Barkley 14-yard touchdown pass.