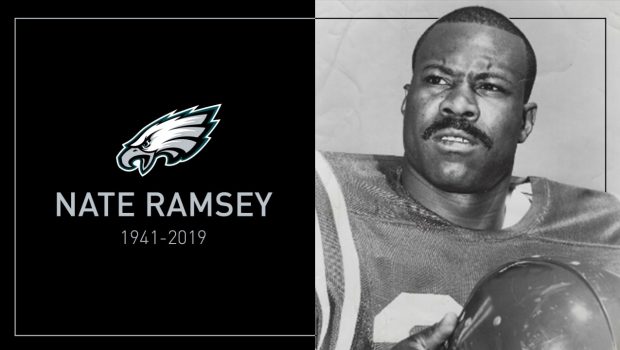 Eagles Nation is mourning the death of former defensive back Nate Ramsey, who spent 10 seasons in Philly from 1963-72.

Selected by the Eagles in the 14th round out of Indiana University, Ramsey is one of just five defensive backs in franchise history to play at least 10 seasons. He ranks sixth among defensive backs in team history with 134 regular-season games played and 13th overall with 21 interceptions.

Ramsey led the Eagles in interceptions in consecutive seasons from 1964-65.

On November 28, 1965, Ramsey picked off three passes against the St. Louis Cardinals. Only one player has ever had more in a single game for the Eagles. Two weeks later, Ramsey notched an interception against the Pittsburgh Steelers, one of nine that day for the Eagles to set a team record that still stands to this day. He retired from the NFL following a season with the New Orleans Saints in 1973.

A native of Neptune, New Jersey, Ramsey is survived by his daughter Angela Ramsey, his granddaughter Kayla N. Whittingham, nieces, nephews, cousins, and many friends.