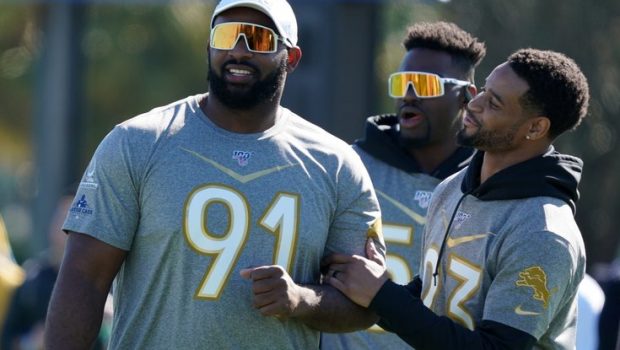 The Eagles signed Darius Slay, which helps their secondary and also reunites him with Mississippi State teammate Fletcher Cox.

“Fletcher and I came into Mississippi State together, we both signed out of high school together, but I had to take the junior college route and he went straight there, so we’ve been knowing each other since high school,” Slay told NBC Sports Philly. “We were on the same visit. Man, it’s a good thing for me to be on a team with a classmate and I’m looking forward to going out there and sharing the field with him once again and compete with him.”

The Eagles drafted Cox in the first round in 2012, and he’s made five Pro Bowls and was first-team all-pro in 2018. The Lions drafted Slay in the second round a year later, and he’s a three-time Pro Bowler and all-pro in 2017.

Slay said he spoke with Cox the night before he was shipped to the Eagles.

“He called me and he just said, ‘Man, I heard we’re trying to get you,’ and he just started explaining to me what to expect coming to Philly (from) the fans and from the owners. He said the owners are straightforward and honest and (the players) treat each other like brothers, they go out there and play ball for each other. And he said the fans will go crazy, he said they’re going to let you know when you’re playing good and let you know when you’re playing bad and I said I look forward to that. I want to know when I’m playing bad myself.”

“Talking to Fletcher, man, that’s what really convinced me, ‘Yeah, this is where I’m supposed to be,’” Slay said. “He just told me all the positive things, consistently going to the playoffs, something I haven’t been doing and something I look forward to doing, so I want to be a part of something great. Fletcher really put it in my head, ‘This is where you need to be, man, this is where it’s at man, we’re winning, the fans will love you.’”