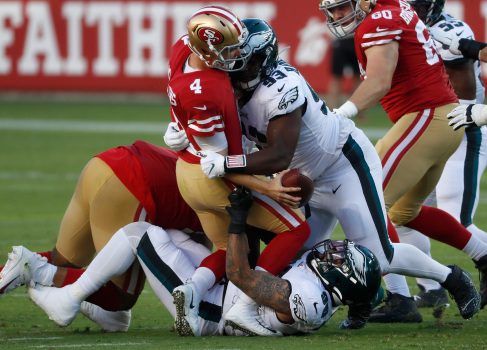 EAGLES D-LINE LOOKING TO DOUBLE DOWN AGAINST STEELERS!

The Eagles defensive line had a big night Sunday against the Niners — five sacks and 15 QB hits as they won 25-20.

They face another challenge Sunday at the Steelers.

“I think they have 13 sacks over the last two football games,” said Pittsburgh coach Mike Tomlin.

“I thought they really took over that Bengal game toward the end and allowed that game to end in a tie with a dominant rush performance by the likes of Fletcher Cox and Brandon Graham. I saw the same thing this past weekend watching them play, but it goes beyond Cox and Graham. They have a seven- and eight-man rotation that’s a formidable one.”