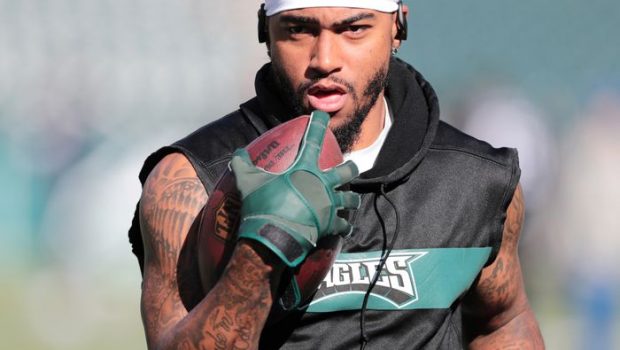 DeSean Jackson was injured returning a punt late in the Eagles’ 22-21 win over the New York Giants on Thursday night.

After he was tackled, he was hit again by Giants defensive back Madre Harper, which bent his right leg awkwardly. Jackson had to be helped off the field and ride the cart into the locker room.

Jackson likely will be placed on injured reserve next week, which means he would miss a minimum of three games.

Jackson had three catches for 34 yards and one carry for 12 yards Thursday, which marked his return after missing three games with a hamstring injury. On the season, Jackson has 13 catches for 155 yards.

In the past two seasons, Jackson has 22 catches for 314 yards and two touchdowns while appearing for 224 snaps in just seven games. He’s battled significant injuries in his return to Philadelphia.

According to OverTheCap.com, Jackson is scheduled to count $10.9 million against the salary cap in 2021, and the Eagles — who are slated to be cash-strapped, especially with a reduced cap — could save $5.1 million by cutting him this offseason.

From @gmfb: #Eagles WR DeSean Jackson has a similar injury to TE Dallas Goedert — a non-displaced fracture in his ankle — and is out 6-8 weeks. Jackson is frustrated but highly motivated to get back this year and next. pic.twitter.com/p0NQippVeU