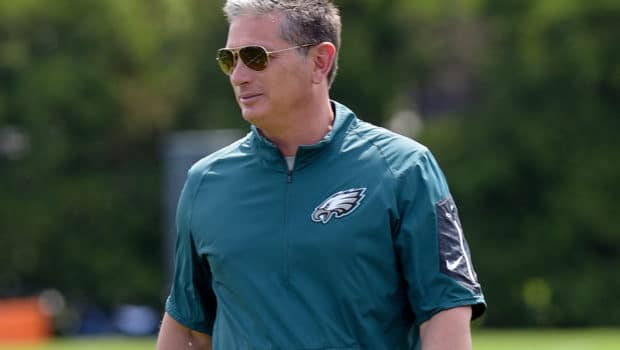 So, the Eagles open training camp this week with a new head coach who has never been one before and a new defensive coordinator who has.

Pederson referred to Schwartz as the “head coach on defense” and said he wanted to “turn the keys over to” him.

Pederson indicated that Andy Reid’s relationship with the late Jim Johnson showed him “how important it was to find that guy you trust on defense,” and that he trusts Schwartz to run things for him on that side of the ball.

“I think this first time around, this first year, he’s implementing his defense, his structure, his style,” Pederson said. “He’s the professional on that side. My expertise is on offense. His is over there on defense. So whether I have suggestions or not, it’s our defense. But at the same time, he’s the master. He’s done it for 100 years. It’s proven.”

Schwartz has been running his own defenses since 2001, first with the Titansas defensive coordinator, then with the Lions as head coach, and again with the Bills as defensive coordinator. As we wrote when he was hired, the last three teams that Schwartz has simply been the coordinator for (the 2007 and 2008 Titans and 2014 Bills) ranked 8th, 7th, and 4th in yards allowed, 5th, 2nd and 4th in scoring, and 1st, 5th, and 2nd in Football Outsiders’ defensive DVOA. In other words, they’ve been really, really good.

The Eagles have a lot of talent up front on defense, as well as on the back end at safety. There are some question marks at corner and linebacker, but questions in the secondary are the kind of thing that can be covered up with heavy pressure, and Schwartz’s specialty is getting pressure while only rushing four players. Pederson is expressing faith in his ability to get that done by letting him have full autonomy over his unit.