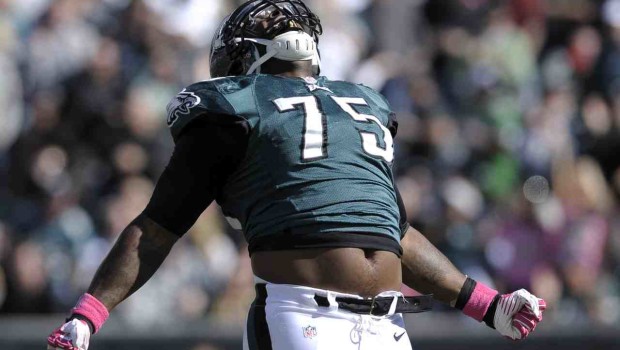 EAGLES’ D-BOSS SCHWARTZ IS LOVIN’ HIM SOME VINNY CURRY!

“We looked at Vinny very hard when I was in Detroit,” Schwartz said recently on 97.5 the Fanatic. “We were getting ready for the draft and thought really highly of him then. You look back at earlier in the career when he was in a similar attacking style defense and even though he was behind some really good football players like Trent Cole, Babin and some of those guys, the thing I like about him is he is a very hardcore competitor.

“You have to be a big-time competitor to get to the quarterback. It’s very rare to just beat your guy clean. It’s due to work ethic. You have to counter. You have to keep on coming. He does that. There are some guys that really fit in the defense here last year, but I don’t think he was a great fit.

“He played in that square stance. They play a lot of two-gap. That’s been proven to be an effective system, also. It just didn’t fit Vinny very well. I think we can cut the handcuffs off of him so to speak and free him loose. I think we can cut those guys loose a little bit and hopefully we see some more production from them.

“I certainly watched just about every game he’s ever coached,” Schwartz said of late former Eagles defensive coordinator Jim Johnson. “We all steal from different people. The thing I liked is he ran a very aggressive style. He had a sort of basic attack style that he played with enough wrinkles in his blitz package to give opposing offenses trouble. They rarely made mistakes and he just let those guys play.

“The greatest compliment to a coach is that you study their tape and try to copy their ideas. I’m not the only person to do that with Jim Johnson, a lot of other guys did the same thing over the years.”