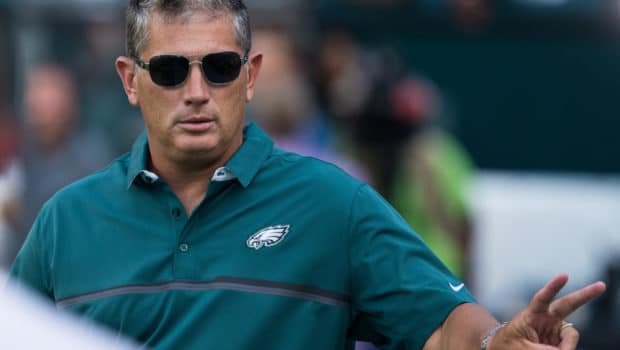 SO, EAGLES’ D-BOSS JIM SCHWARTZ: HOW LONG WILL YOU BE IN PHILLY?

“I’ll pass on that question,” Schwartz said, as reported by Sports Illustrated. “We have enough to get ready for the Rams, and I think it does nobody any good to mention that. There is really no right way to answer that. If you answer it and say, ‘Yes,’ then your eyes are on the wrong thing. You answer it and say, ‘No,’ then people…”

Schwartz didn’t finish that thought, but the point he was trying to make was clear enough. Most 51-year-old coordinators who have served a term as a head coach would not say no to that question. “It’s about that time for him to have another opportunity to be a head coach,” said Nate Burleson, the retired receiver and NFL Network analyst who played four seasons for Schwartz with the Lions.

Schwartz’s brash, in-your-face nature was certainly front and center in Detroit—most notably when he got in Jim Harbaugh’s face in 2011 after the then-49ers coach bounced across the field for a particularly gleeful post-game handshake following a win against the Lions. Schwartz chased Harbaugh down, sparking an inter-squad brouhaha: