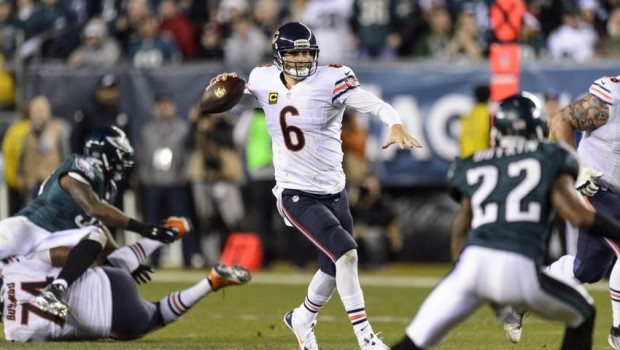 EAGLES’ D-BOSS JIM SCHWARTZ KNOWS HOW TO TO BEAT CUTLER!

The best game Bears QB Jay ever Cutler had against a Jim Schwartz’s defense came in 2009 when he completed 22 of 36 passes for 276 yards with four touchdowns for a rating of 122.0.

“With that defense you’re going to get multiple looks,” Cutler said of Schwartz’s schemes. “He’ll play the wide-9 out of the 4-3. He’s going to bring pressure and he’ll bring it from anywhere, a linebacker, a cornerback, a safety. You have to be ready for that.

“(Schwartz) is extremely smart. He’ll have us scouted and he’ll try to take away what we do best.”

Cutler watched Schwartz’s Eagles’ defense last week against the Cleveland Browns and was impressed the most by what it did on third down. The Browns converted on just two of 10 third-down opportunities for the game.

“They made a living on third down,” Cutler said. “It didn’t matter if it was third and short or third and long, they got off the field. If they do that again, it’s going to be tough for us.”