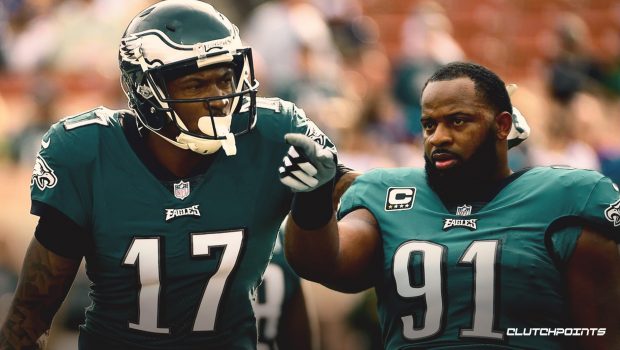 EAGLES COX, JEFFERY GET A HEAD START ON TRAINING CAMP!

The Eagles aren’t due at training camp at NovaCare in South Philly until July 24, but…

Fletcher Cox and Alshon Jeffery are already getting ready.

Cox and Jeffery are working out at Southern Methodist University in Dallas.

Cox suffered a foot injury on a fake punt conversion by the New Orleans Saints in a 20-14 loss in the NFC Divisional Playoffs.

The Eagles had two tough losses to the Saints last season, both of which still haunt Cox:

“Last year I went 0-2 against them and there are a lot of Saints fans in the area, some of my friends are Saints fans,” Cox said via WAPT in Jackson, Ms. “You know, I can’t hold it against them. I think that’s just part of the competitiveness and the drive, but that’s all good. I play for the Eagles and a lot of people support that.”

Cox earned his fourth All-Pro selection in five years last season, but his first on the first team. He finished with 95 pressures, 60 hurries, 34 quarterback hits, 10.5 sacks, 46 tackles, 30 stops, and 12 tackles for loss.

Having both Cox and Jeffery at full strength will be huge for an Eagles team this season that hopes to contend for its second Super Bowl title in three years.