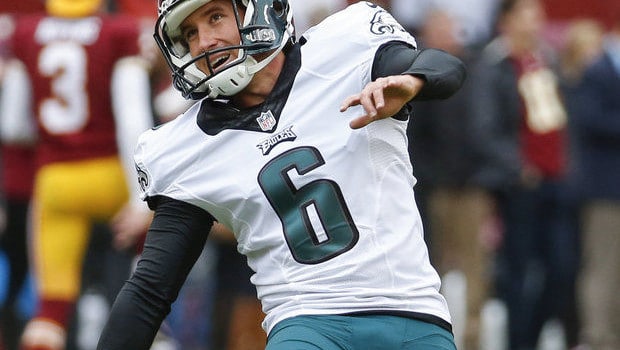 EAGLES-COWBOYS: WHO FANTASY OWNERS SHOULD SIT AND START!

This could be a field-goal-heavy game, boding well for Eagle placekicker Caleb Sturgis.

Start ’em: The Eagles RB situation has been murky, but injuries to others have DeMarco Murray firmly out in front for at least one more week… You like any defense going against the current Dallas offense, and this week that’s the Eagles’ defense.

Start ’em?: If Ryan Mathews were fully healthy, he might be moving in on Murray’s carries, but his nagging injury means it’s not a great move unless you’re desperate.

Sit ’em: Forget Sam Bradford. … With Murray and Mathews there, Darren Sproles isn’t much of an option. … Birds have had a receiver do well almost every week, though it’s almost never the same guy twice. Just don’t use Jordan Matthews, Nelson Agholor, Riley Cooper, Miles Austin or Josh Huff, and the tight-end duo of Zach Ertz and Brent Celek are stay-aways as well.

Start ’em: With a week back on the field under his belt, Dez Bryant should be a starter this week. … Dan Bailey has been strong most of the season.

Start ’em?: Against a strong run defense, Darren McFadden is only a flex play … This has been a rough year for Jason Witten, averaging 4.2 fantasy points a game since his huge Week 1. … The Cowboys’ defense is average, and Bradford is bad.

Sit ’em: Tony Romo can’t come back soon enough for the Cowboys. Don’t use Matt Cassel. … If the team ever committed to Christine Michael, maybe he could pop, but he just doesn’t have the touches right now. … Bryant’s return pushes Terrance Williams to all benches.