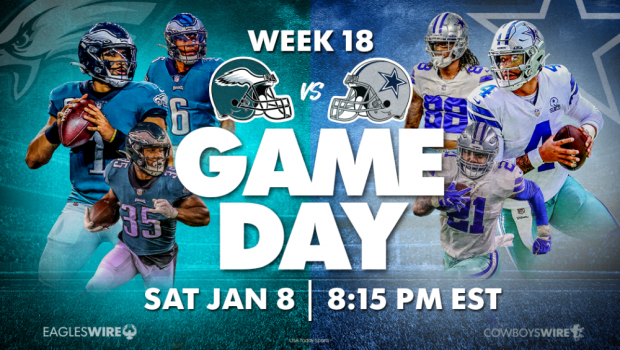 The meaning of life is a question on the agenda the world over.

But in Eagles Nation, the answer is simple:

So tonight’s Week 18 game at the Linc begs another question:

Should the Eagles rest their starters, many of whom are dinged up, even though a win and a Niners loss tomorrow at the Rams would move Philly up from 7-seed to 6 in next week’s playoffs?

Dallas (11-5) clinched a playoff spot and the NFC East title in Week 16 and is the No. 4 seed in the NFC heading into tonight’s game.

The Eagles (9-7) have won seven of their last nine games after starting the season 2-5 and grabbed the No. 7 seed with last week’s win over WFT.

In their first meeting, the Cowboys blew out the Birds in quarterback Dak Prescott’s first home game for Dallas since his gruesome ankle injury last season. Prescott had three touchdowns and over 200 passing yards in that Week 3 game.

Dallas’s high-powered offense has sputtered in recent weeks, however, stamped by a 25-22 loss to the Cardinals last week. The Cowboys’ run game has been inconsistent (Dallas rushed for just 45 yards last week), and the offense has not pushed the ball down the field — both, in part, because of struggles on the offensive line.

Running back Ezekiel Elliott hasn’t had the same impact many are used to seeing as he deals with a knee injury. Micah Parsons, Dallas’s 2021 first-round pick, has been part of its defensive turnaround this season but was put on the reserve/Covid-19 list this week and could miss Saturday’s game.

Still, Jerry Jones, the Cowboys’ owner and general manager, indicated in a radio interview on 105.3 the Fan this week that the team had no plans to rest its starters.

Much of Philadelphia’s success this season has come behind a dominant ground game, led by running back Miles Sanders, who is the team’s second leading rusher behind quarterback Jalen Hurts. Sanders will miss this game with a fractured hand. Hurts has been a hesitant runner in recent weeks as he plays through a high ankle sprain.

Philadelphia could also be without a host of other starters as the team placed 12 players, including center Jason Kelce, defensive tackle Fletcher Cox and tight end Dallas Goedert, on the reserve/Covid-19 list on Monday. It remains unclear whether Eagles Coach Nick Sirianni plans to rest any of his starters.