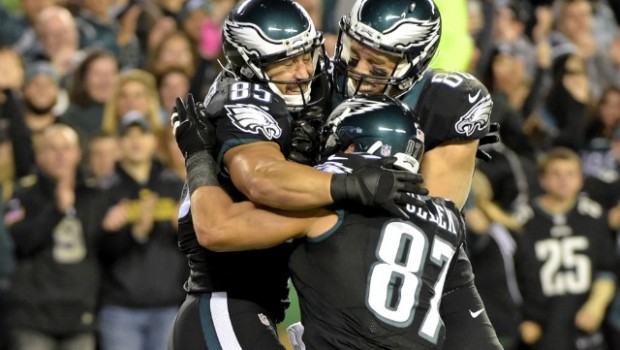 Don’t look now, but the NFC East, once thought to be the NFL’s cream puff division, is one of the toughest and has the tightest race to the top.

Before Sunday night, we could have said the same about the Giants, with their quickly-jelling Ben McAdoo-run offense and their better-than-expected defense that had helped the team to three-straight wins.

But the Eagles, with their 27-0 win vs. New York, proved that the NFC East is a two-team race — and a hot one at that. It’s between the Cowboys — who shocked theSeahawks at home earlier in the day — and Philly, which finally displayed the offense that Chip Kelly made us believe we would see all along.

Maybe the Eagles victory wasn’t quite as impressive as Dallas going into Seattle and grabbing a win, but the Birds’ win was solid in its own right, considering the Eagles snapped a Giants three-game winning streak and dominated a division rival on national TV.

Running back LeSean McCoy got back on track, rushing for 149 yards on 22 carries, and quarterback Nick Foles was solid, completing 21 of 34 passes for 248 yards, two touchdowns and two interceptions. Meanwhile, the defense recorded its first shutout in 18 years, and the Eagles scored their biggest win vs. the Giants since a 35-3 victory in 1980.

Now, the Eagles and the Cowboys both sit atop the NFC East with matching 5-1 records. If you can’t wait to see what happens when the two teams face off, we’ve got bad news: they don’t play each other until Weeks 13 and 15.