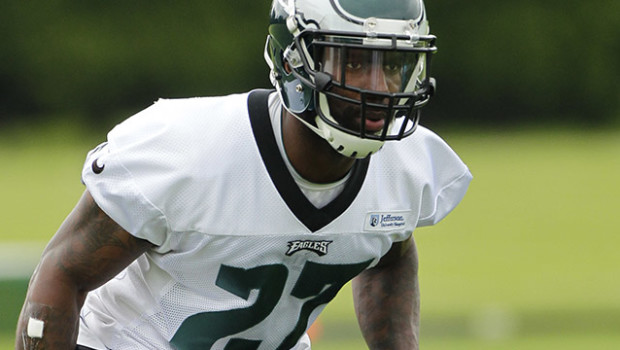 EAGLES COUNTING ON DEPTH OF DEFENSE TO MAKE A DIFFERENCE

Can the addition of free safety Malcolm Jenkins (photo above) make a big difference in the Eagles’ secondary that got torched on a regular basis last season when Patrick Chung was the torchee?

According to coordinator Bill Davis it’s more than just the 11 starters that will make the Eagles’ defense better this season.

The team has better depth at almost every position. And perhaps even more importantly, a year of experience in his defense.

”Well, I think we’ve grown in some coverage concepts,” Davis said. ”We’ve added three or four coverage concepts that we’ve worked on a lot in the preseason that we didn’t have last year. They were routes that were beating the coverages we had in place last year and these coverages take away those routes.

”We were lacking a couple coverage concepts last year because of what I’ve said before it just would have been too much too early. So we took what we had last year and we built on and filled in the holes that we needed. You can’t put it all in and have it all in year one.

”That is the hardest part of year one is that you have to just have a foundation. In year two, we’re slowly starting to stack some other defensive tools that we can use to stop the offenses coming at us.”

Davis admits the defense needs to get better, especially the pass defense that allowed 4,907 yards.

”We gave up obviously way too many passing yards last year,” Davis said. ”So in general, you could say this will help tighten our coverage down and not give up the yards that we gave up last year.”

Neither coach Chip Kelly, nor Davis, has made official what the starting lineup will be, but Jenkins appears to be the only new starter.

Bennie Logan will line up at nose tackle with Fletcher Cox and Cedric Thornton at the ends. But there is depth with rookie nose tackle Beau Allen, pass rusher Vinny Curry, rookie Taylor Hart and second-year pro Brandon Bair.

Connor Barwin and Trent Cole are still the outside linebackers with Mychal Kendricks and DeMeco Ryans inside.

In the secondary, Jenkins will line up behind strong safety Nate Allen, who held off the challenge of Earl Wolfe and cornerbacks Cary Williams and Bradley Fletcher. Free agent addition Nolan Carroll may have had a shot to start if he didn’t miss half the preseason with a groin injury.

With Carroll, as a dime corner, and playmaking slot corner Brandon Boykin, in the nickel, are other examples of the depth of the defense.

”There are only 11 guys who can start,” Davis said. ”Brandon is a good pass rusher and good outside backer. But he’s competing and rotating in. It’s a great problem to say ‘why can’t all these guys play?’

”Why can’t Vinny be in every play, why can’t Brandon? Well, there are other good players in there, too. And we’re trying to get a great mix of reps during games that they all play. If you’re active for us, you’re playing. The more production you have, the more we’ll give you. But there are different packages. Every player has different strengths and weaknesses. It’s our job as a staff to make sure we have the most guys playing to their strengths.”