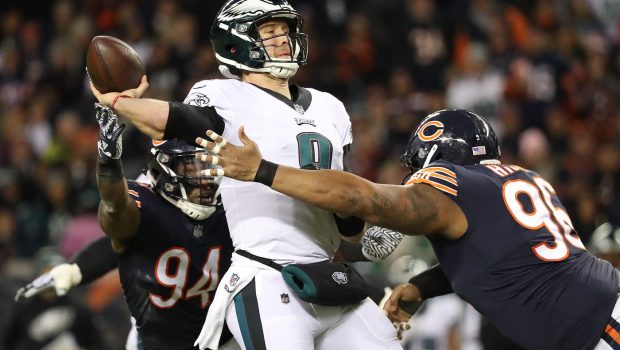 EAGLES COULD GET SOMETHING FOR FOLES INSTEAD OF LETTING HIM WALK IN FREE AGENCY, HERE’S HOW!

There is a real possibility that the Eagles are able to pursue a trade of Nick Foles without having to extend into the franchise tag period, and with Foles not having to pay back any of his bonus to buy his way to free agency.

Under the terms of his contract, Foles would pay back $2 million of his $20 million salary for 2019 — which is triggered by his option being picked up — in order to hit the open market.

However, the Eagles could allow Foles to keep that money and then orchestrate a trade to a team of his liking, a possibility that one source with knowledge of the situation indicated should not be discounted. The Eagles have a strong relationship with Foles and in reality, there are only going to be two-to-four teams likely in the market for him, anyway.

Jacksonville and Miami are the two teams most often considered as suitors for the Super Bowl LII MVP. The Jags in particular have been doing work on Foles and Joe Flacco, I’m told, and are set to pursue an established, winning quarterback to try to get them back in the playoffs. With a limited market of teams — if you recall, there was record turnover at QB last offseason, with far fewer teams in the market for them now — it is not as if Foles will be making the rounds all over the league with a half dozen teams making offers.

In this scenario, Foles could keep the full $20 million and he will be working out an extension with any team he is traded to, anyway, so the Eagles wont be dealing him somewhere he is isn’t comfortable signing with. It would allow the team to get draft-pick compensation for him now, rather than waiting for a compensatory pick in 2020, and the Eagles wouldn’t have to deal with the cap ramifications of carrying him on the franchise tag, either.

At this point the sides have yet to really engage in this process, which has numerous potential outcomes depending on what the Eagles do with the option. But ruling out a trade, without the use of the franchise tag, may not be wise: