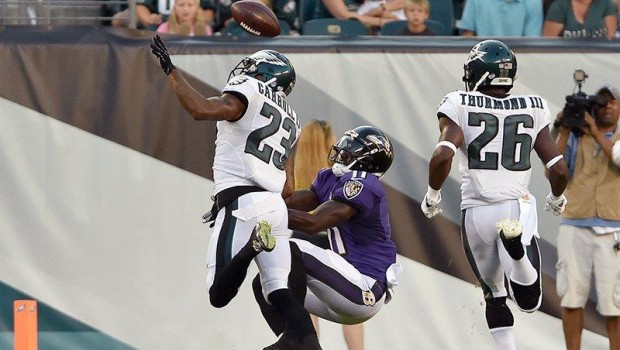 EAGLES CORNERS ARE AWFUL, SCHWARTZ ADMITS — WHAT WAS HIS FIRST CLUE?

The bloom is off the rose of Eagles’ defensive coordinator Jim Schwartz and his once-sturdy troops.

After a blistering start to the season and holding the high-flying Atlanta Falcons to 15 points in Week 10, Schwartz’s defense has gotten torched. Philly has allowed at least 26-plus points in each of the last three games, including a 32-14 beat down by Andy Dalton and a Bengals offense missing several key players.

Schwartz said he tried everything to slow Cincinnati. Nothing worked. The former head coach pointed the finger squarely at one position: struggling cornerbacks.

Early in the season, Schwartz’s corners were masked by a potent pass rush and stellar safety play. Without pressure on the quarterback, that weakness on the edge got exposed.

The Eagles have managed just six sacks since Week 8 and earned none in back-to-back games.

This isn’t all about Schwartz either. The Eagles’ defense disintegrated last season under a different staff with mostly the same front-seven players.

Coach Doug Pederson mentioned blitzing more Monday, but that’s never been Schwartz’s style. Dating back to his days with Tennessee, the defensive coordinator has relied on a penetrating front four while dropping more into coverage.

Pederson backed off his blitz suggestion Wednesday after discussing it with Schwartz.

Eagles corners have been brutal and were a clearly a weakness entering the season — which is why the trade of Eric Rowe to New England seemed head-scratching before the season.

After putting his corners on blast, Schwartz now wants them to get back to basics.

“The only thing you can do in a slump is go back to basics, go back to technique,” Schwartz said. “If you’re a corner, it’s about technique and it’s about confidence. We’re not playing with a lot of confidence at corner, and we need to tighten up our technique.”

Corner will once again be a focal point this offseason. Whether Howie Roseman can actually upgrade the unit this time around remains to be seen.