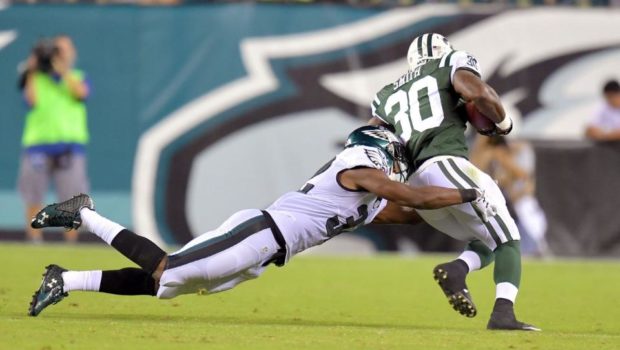 All of a sudden, Eagles’ second-year cornerback Eric Rowe is looking like the odd man out.

The Eagles closed their preseason on last night against the Jets, and Rowe played in the second half of the most meaningless football the team will play this season.

It wasn’t where Rowe was expected to be when camp started last month, as he started the final five games of the season for the Eagles last year, and seemed to be on his way up the depth chart, not down.

Now, you have to wonder if his fall will lead him all the way out of Philly.

“I can’t say that. That is not in my control,” Rowe said Thursday when asked if he felt his roster spot was safe. “All I can do is do my thing out in the game like I did today, so I can’t say yes or no to that one.”

Although it is hard to see the Eagles releasing Rowe, it is not a stretch that they might trade him.

Rowe seems to be fairly deep down the depth chart, behind starters Leodis McKelvin, Nolan Carroll and Ron Brooks, and also behind backup Jalen Mills. In fact, Rowe might even be behind undrafted free agent CJ Smith, who got first-team reps with the defense last week.