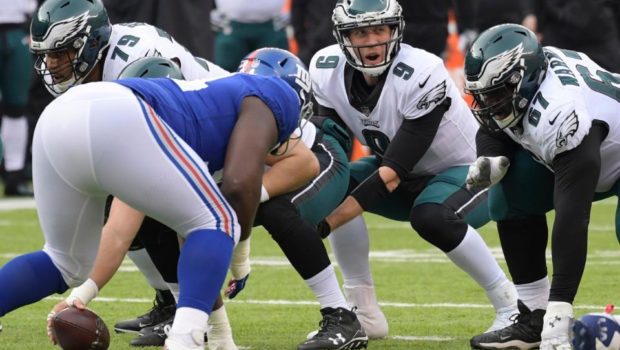 After playing a lackluster first half defensively, giving up 23 points to the dead-men walking NY Giants, the Eagles held them to 6 second half points to notch their 12th win of the season 34-29!

In doing so, they also clinched a first-round playoff bye as this magical season grinds on for the Midnight Green.

It was amazing that Foles looked cool as a cucumber going 24-38 for 237 yards, no interceptions and a QB rating of 115.8 in his first start of the season!

Three Eagles special teams blocks helped propel this come from behind victory. Derek Barnett blocked an extra point attempt in the first quarter, Kamu Grugier-Hill blocked a punt which led to an Eagles touchdown. Then Malcolm Jenkins blocked a field goal attempt that would have given the Giants the lead, tremendous efforts for a unit that has been good all year but came through big time with the game up for grabs.

The Eagles attempt to enhance their perfect 6-0 record at home, with the Oakland Raiders visiting Lincoln Financial Field on Christmas night, December 25, 8:30pm/ESPN.