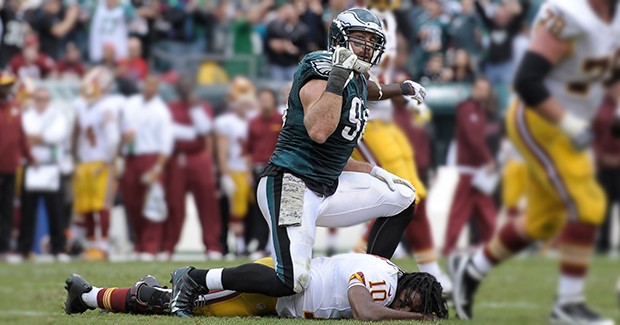 Connor Barwin has been one of the Eagles’ stalwarts on the defensive side of the ball, and he is psyched about defensive coordinator Jim Schwartz’s decision to scrap the 3-4 defense the Birds employed last season for a 4-3.

“I’m excited because in a 3-4, it’s a lot of movement. It’s a lot of disguise. There won’t be as many games anymore. I’m going to line up, pass rush and be able to work a guy over for an entire game. I’m excited for that.”

Barwin, who finished with 54 tackles and seven sacks in 2015, says he met with Schwartz the day he was hired and also sat down for a lengthier conversation since. Both he and his teammates are looking forward to the new coordinator and what he’s bringing to the table.

“I think everyone was really excited when we found out he was going to be our defensive coordinator,” Barwin said. “Honestly, I think I was at the top of that list.

“It’s on me as a leader and some other leaders on our team to get together during this time off,” Barwin said. “It’s not like we’re not allowed to get together. We can’t get together as a group of 20 of us all together at the facility to go over things, watch tape or anything like that. But, we can do that outside and we will be doing that together, here soon.”