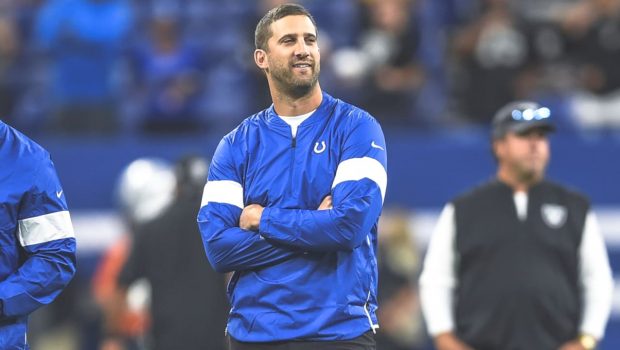 The Eagles are now on their 11th day without a coach since Doug Pederson was fired.

But if Mike Kaye’s report on NJ.com is accurate, they just spent an overnighter with Colts offensive coordinator Nick Sirianni, which initially began on Tuesday, has extended into Wednesday:

“The Eagles’ head-coaching interview with Indianapolis Colts offensive coordinator Nick Sirianni extended into Wednesday, a person with knowledge of the meeting told NJ Advance Media. Sirianni’s has worked under former Eagles offensive coordinator Frank Reich for the past three years. According to a third source, a recommendation from Reich would likely go a long way for Sirianni’s candidacy.

While the Eagles head coaching vacancy initially seemed as though it was New England offensive coordinator Josh McDaniels to lose, Sirianni has emerged as a serious candidate—at the very least.

He’s helped by his close coaching relationship with Reich, who previously served as the Eagles beloved Super Bowl winning offensive coordinator (2016-17) prior to joining Indianapolis—and can certainly vouch for his young Colts offensive coordinator’s candidacy. Reich also can provide Sirianni a good idea regarding the culture of the Eagles ownership and front office—which can be pivotal for any NFL head coach’s success.

Still only 39 years old, Sirianni was named to The Athletic’s NFL’s ‘40 under 40’, as he’s been regarded as one of the better young offensive minds in football.

Regarding his other past coaching experience:

Siranni previously served as the San Diego/Los Angeles Chargers wide receivers coach (2016-17), quarterbacks coach (2014-15), and offensive quality control coach (2013)—while also having a number of years of professional coaching experience with the Kansas City Chiefs organization, dating back to 2009.

During 2020, while Sirianni did not primarily handle offensive play-calling duties from the sidelines, the Colts offense averaged the 9th most points at 28.2 average points per game. The offense also averaged the 10th most yards at 378.1 total yards per game—despite lacking an elite quarterback and receivers respectively.

While Sirianni has earned this opportunity (and nobody’s rooting against him), Colts fans will be hoping the team can keep him in Indianapolis—for their own selfish reasons.