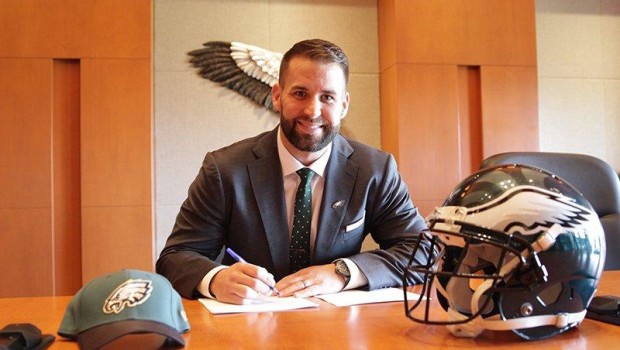 If you think new Eagles quarterback Chase Daniel will be satisfied as Sam Bradford’s back-up, read on:

“Competition breeds excellence, I truly believe that,” Daniel said yesterday during his introductory press conference at the NovaCare complex. “I go back to my time in New Orleans with Drew [Brees]. I was a second-year pro, he’s a future hall of famer and I’m telling him every single day when I’m the backup: ‘I’m coming for your job, dude. I don’t care if you’re Drew Brees. I don’t care who you are.’

“My mindset isn’t going to change. Drew and I are the best of friends, to this day. It brought out the best of us. It made us closer and it made the team better.”

The Eagles signed Bradford to a two-year contract last week and Daniel followed with a three-year deal, with $12 million guaranteed, on Wednesday, the first day of free agency.

Daniel has only thrown 68 passes with one touchdown and one interception in 11 career NFL games, but stressed that his limited experience isn’t going to deter his competitive nature.

“I wouldn’t be in the NFL if I didn’t think I could be a starting quarterback in this league,” Daniel said. “I’m looking forward to competing here. Not only will the quarterbacks be competing, but the entire team is going to be competing. That’s what makes the team special. When your entire team, your backups and your lower-level players are competing to be the starter, that starter has to work even harder to hold onto his job.”

Daniel said that he received offers from other teams, but in the end the allure of reuniting with Pederson and the chance to play for the Eagles’ coaching staff was just too strong to pass up.

“It’s not every day that you get to play in an offense under Doug Pederson, coach Frank [Reich], coach John [DeFillipo], that have all played in the NFL,” Daniel said. “[They] have all called plays in the NFL. That quarterback pedigree really excited me about what’s going on here in Philadelphia.”