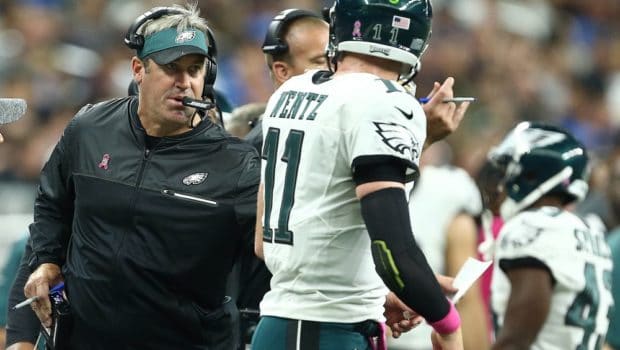 IS EAGLES COACH PEDERSON SMART ENOUGH TO CALL THE PLAYS?

The good news is that Eagles’ training camp is right around the corner — rookies report this Sunday.

The bad news is that coach Doug Pederson seems to think he should call the players when the Birds start the season in September.

Even though he showed no ability to do so last year!

Before Pederson became coach of the Eagles, he spent many years as an assistant under Andy Reid and got an up-close look at a head coach who also handled offensive play calling.

Given that, it wasn’t a great surprise that Pederson chose to handle things the same way during his first season in Philly or that he’s planning to keep things working the same way in Year Two. Pederson admitted that there were times in 2016 when he was too focused on offense, but says he learned from that experience and wants to hold onto the extra duty.

Pederson added that he will be delegating more things to offensive coordinator Frank Reich “as far as the planning” so that he can do more to manage the big picture for an Eagles team trying to improve on last year’s 7-9 record.