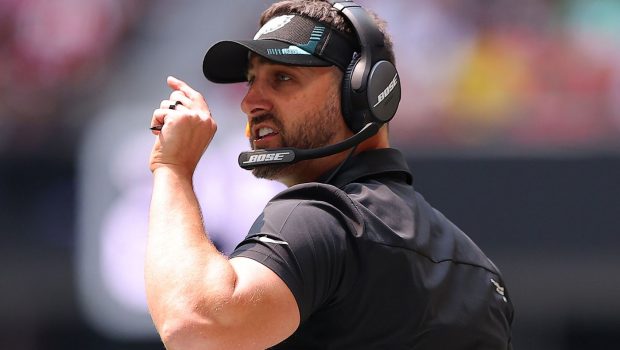 Eagles coach Nick Sirianni got tons of criticism for his first forays into the dicey world of Philly media.

He was proclaimed over his head and not ready for the tender mercies of assholes like Howard Eskin and his goofball friends.

We took a calmer approach, since not every coach gives crisp sound bites.

Such as Andy Reid and Bill Belichick, who have won Super Bowls even though they don’t rate with the media hordes as great interviews.

And now Sirianni has a win under his belt.

So when he met the media yesterday after a 32-6 road win against the Falcons, we watched intently. He wore a “Dawg Mentality” T-shirt to his Zoomer and reminded everyone not to get carried away with one game.

“We’ve been talking about dog mentality over and over again,” Sirianni said. “It’s a week- to-week thing, a day-to-day thing. If I think about on Wednesday when we come back out here how well I played in the Atlanta game, then I’m gonna get my butt kicked this upcoming Sunday, so it’s living in the moment of what you are in.

“We literally live in the moment of how are we going to leave this building today better than we were yesterday. If you’re thinking about the past or have a big ego based on how you played, you won’t do that.”

“In all honesty, we won one game. We gotta go out there and do it again,” Sirianni said.

Coming off a 4-11-1 season that led to Super Bowl-winning Doug Pederson getting fired and franchise quarterback Carson Wentz being traded, the Eagles didn’t have high expectations. After one game, they’re the only team in the NFC East with a victory. It’s a long season, the longest ever as the NFL plays a 17-game schedule.

“All the hard work we put in, all the different changes we’ve endured, we’ve had to overcome and persevere with new coaching, new values as a football team, and buying into it,” Hurts said. “Coming out here we won, and started off the right way. I think that’s good.”