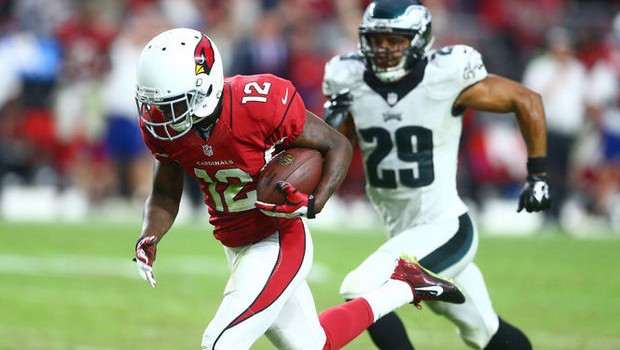 Allen looks like a defeated man as Brown scores the winning TD.

It’s not as if we haven’t seen this movie before.

The Eagles fight tooth and nail to stay in a tough game with a very good team and then the secondary acts like a bunch of clowns and throws the game away.

So, it’s getting old.

Eagles cornerback Cary Williams didn’t play a bad game, until the end. Williams let Cardinals rookie John Brown run past him and safety Nate Allen for the 75-yard touchdown pass that gave the Cardinals the 24-20 lead.

So the Eagles are 5-2, and stand to fall a game-and-a-half behind Dallas in the NFC East, providing the Cowboys win as a 10-point favorite at home against Washington on Monday night.

Is it the end of the world? No. The Eagles’ season hinges on the game in Dallas on Thanksgiving and the one against the Cowboys 17 days later at The Linc.

Before that, the Eagles must clean up an offense that can move the ball at will, but kills itself much much too often.

On Foles’ second interception, the one that allowed the Cards to tie the game with a field goal, it appeared to be a really bad pass. But if you look again, wide receiver Riley Cooper might have crossed up the quarterback on that one.

Nobody should ever question Eagles wide receiver Jeremy Maclin’s toughness again. Not that you should have before. Maclin was darn near knocked out, went to the locker room, was reportedly bleeding from his ear, and came back in on the same series. Maclin needs a new long-term contract.