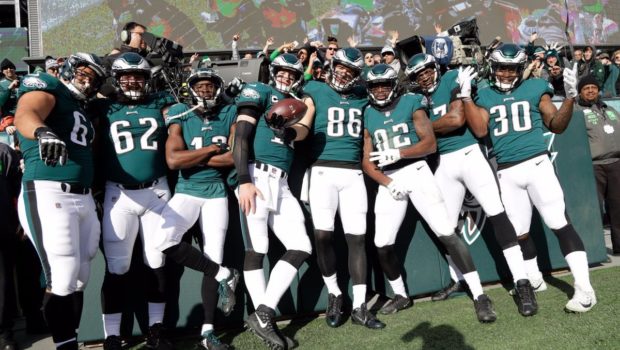 EAGLES COULD CLINCH NFC EAST THURSDAY OR SUNDAY — HERE’S HOW!

The Eagles can clinch the NFC East crown this Sunday if they beat the Seahawks or simply tie.

They will be 11-1, which will put them at least five games ahead of either the Cowboys or the Redskins (who play on Thursday night), regardless of who wins.

An Eagles win would make it mathematically impossible for them to be caught by either Dallas or Washington.

In fact, win on Sunday and the Eagles guarantee themselves they will host a playoff game. At 11-1, they would also be pretty likely to secure a bye at some point in the next four weeks. But they don’t even have to win in order to lock up the division.

A tie would also be enough to secure the division because it would mean worst case the Eagles finish 10-5-1. If the Cowboys won, they would be 6-6 and best case could finish at 10-6, which is a worse winning percentage than the Eagles worst-case scenario.

The Eagles could actually clinch the division before they even play, if Washington (a one-point underdog) is capable of beating the Cowboys. In that scenario, the Cowboys would fall to 5-7, while the Redskins would be 6-6.

Additionally, Dallas tying the Redskins would leave both teams at 5-6-1, which means neither team could finish better than 9-6-1. The Eagles already have 10 wins.

In other words, the Cowboys are very much fighting for their playoff lives this Thursday night, while they could help to do the Eagles a favor by losing and handing Philly the division.