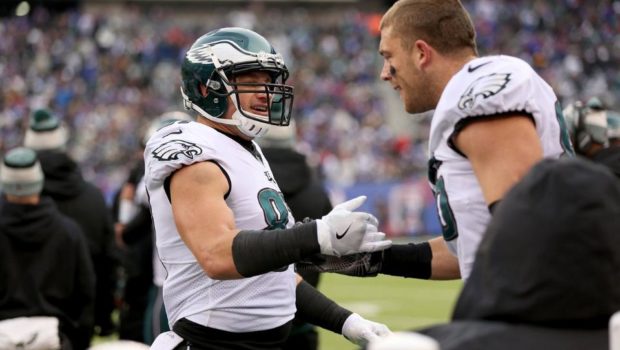 EAGLES CLINCH HOME FIELD THROUGH JANUARY TONIGHT WITH A WIN!

1. yz-EAGLES (12-2): NFC East champion. One more win or Minnesota loss will keep the Eagles at Lincoln Financial Field through January.

2. y-Minnesota Vikings (12-3): NFC North champion. The dream is to become the first team to play a Super Bowl on its home field. But even after taking care of the Packers on Saturday night, the Vikings need help to get the No. 1 seed — and still have work to do before scoring a bye.

4. x-New Orleans Saints (11-4): NFC South leader. They’re going to the playoffs and just a win away from claiming the division.

5. x-Carolina Panthers (11-4): Wild card No. 1. They’re into the field as well and still have an outside shot at the NFC South crown and a first-round bye.

6. Atlanta Falcons (9-6): Wild card No. 2. Sunday’s loss at New Orleans means they can no longer retain NFC South crown. But Atlanta is still just a win shy (or Seattle loss in Week 17) from punching its return ticket to postseason.

2. y-Pittsburgh Steelers (11-3): AFC North champion. They can snatch the other AFC bye by beating the Texans on Christmas.

5. Baltimore Ravens (9-6): Wild card No. 1. Their end-of-season schedule has them sitting pretty with the lowly Colts their latest victim on Saturday. Beat the Bengals in Week 17, and Baltimore is assured a wild-card spot.

6. Tennessee Titans (8-7): Wild card No. 2. Their 7-4 record in AFC games currently gives them the tiebreaker over the Chargers and Bills.