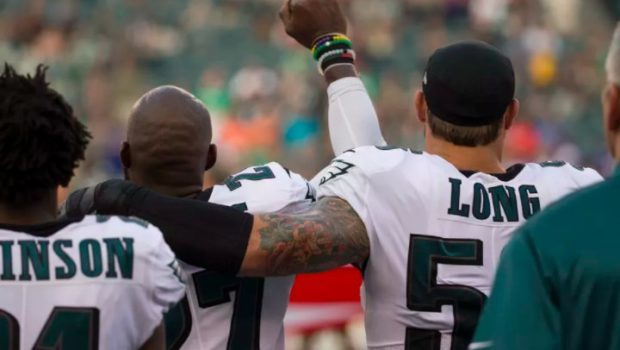 “I’ve heard a lot of people say you need white athletes to get involved in the anthem protests,” Long said. “I’ve said before I’ll never kneel for an anthem, because the flag means something different for everybody in this country, but I support my peers. And if you don’t see why you need allies for people that are fighting for equality right now, I don’t think you’ll ever see it. So my thing is, Malcolm is a leader, and I’m here to show support as a white athlete.” A native of Charlottesville, Virginia, Long has been outspoken about the recent events in his hometown. Earlier in the week, he called the actions of the violent protestors “despicable.”

Chris Long with his arm around teammate Malcolm Jenkins as he raises his fist during the national anthem. pic.twitter.com/RwXYFMl35V