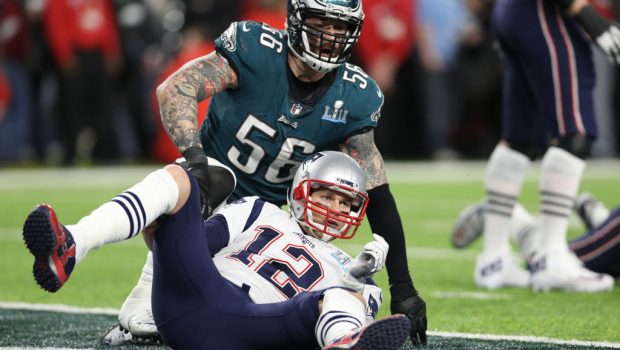 EAGLES CHRIS LONG LEAVES THE STAGE ON HIS OWN TERMS!

The news that Eagles defensive lineman Chris Long was retiring didn’t shock us because he had been hinting at it since the season ended four months ago.

But it was still a jolt and a sad one because Long was an ace on the field and off.

“I learned to never make a decision based on just one thing. The decision to retire was complicated. It was based on health, which is still very good, and family, we have two small children, and football fit, which includes a chance to win and my role and geography. Philadelphia is where I wanted to play a couple more years. I love Philadelphia. But as a player I learned the most important thing to me is Sunday, and having a chance to be a big part of it. It seemed like player-coach was kind of the role that was going to be carved out for me—maybe playing 10, 12, 15 plays a game. I’m a rhythm player. I need to set people up, I need to be in the flow of the game. If I sit on the bench for three series, I can’t get rhythm, and I’ll get cold and maybe I’ll hurt myself. Some people think that’s great—play less and you won’t get hurt. Man, I want to play ball. In Philadelphia, it didn’t seem there was much of a chance to compete there. But they were honest with me the whole time. I appreciate the honesty. I’ll always love Philadelphia and the Eagles, but I didn’t want Week 4, 5, to come around and people think, Whoa, where’s Chris? Did Chris retire? I’d rather do it this way than just fade out. And I didn’t want to start over again across the country somewhere.

“I learned so much in my career. Getting drafted second overall, and going to St. Louis, and the fact that we were losing, I just thought, I am not gonna fold. I am not a loser. I am gonna be a bright spot. I am gonna give these fans, who I deeply appreciate for their dedication, the respect they deserve . Anyone playing in that era in St. Louis knows how bad it was at times. It was carnage, in so many ways. It was a test of my will. Do I get irritated by the no-Pro Bowl thing, never making a Pro Bowl? Yeah, I do. Fifty sacks in the first six years, with no one watching, on a bad team. I just felt the narrative should be, That kid panned out. But that’s okay—it was a labor of love. I have zero regrets.

“In New England, I learned so much about football. I always thought I was a smart player, even though I never thought about anything but the six inches in front of my face. In New England, I was forced to learn so many schematic concepts. In my career playing football, nobody asked me to do as much as Bill Belichick did. I might be 3-technique, or a linebacker, or a linebacker dropping into coverage more than ever, or playing inside more than ever. I’ll always remember how much I learned watching Bill in practice. He can coach any position as good as any position coach in league. He can walk around the field and stop drills and coach each position—at the highest level. And the quality of the dudes. Solid men. The right kind of people.

“Tom Brady blew me away. Who’s the most famous athlete of our generation: Tom Brady? LeBron? Messi? Ronaldo? Serena Williams? Maybe I haven’t been around enough to know how the biggest stars really act. But Brady is a normal guy. When I got there, here comes Tom. ‘Hey Chris, I’m Tom, nice to meet you.’ Well, yeah, I know you’re Tom. A lot of people want to hate him for all the success, and I understand how you can dislike the Patriots, but I cannot understand how you can dislike Tom.

“That Super Bowl against Atlanta … when we were way behind, I’m thinking, ‘I waited my whole life to be here, and this is a nightmare. This is the worst nightmare I have ever had.’ If we lost that night, I very possibly would have retired a bitter man. But winning it breathed life into me.

“Going to Philadelphia, I felt I found a home. Best sports city in America. But how different my situation was. I went from team captain with the Rams two years before that to winning the Super Bowl in New England to starting on the bottom in Philly. I was an average Joe. I was challenged. I learned how much being a team, being together, really means. We were a case study for whatever you believe. Either we were an anomaly or we proved you could do good things and win in pro sports. We happened to have guys who were good players who cared. I remember winning a Monday Night Football game, falling asleep at 4 or 5 o’clock, and waking up for a train to Harrisburg to work with state legislators on policies. It just showed how much we could make changes in things that matter, and play really good football too. You can be a football player and a citizen. It’s gratifying when young players come up and say they’re inspired to do more because of things that Malcolm Jenkins or Torrey Smith have done, or me.

“I’ve always tried to be me first and a football player second. When I came into football, I didn’t want to be this piece of wreckage who couldn’t move or have a normal life. But I learned you can’t predict the future. I thought I’d play eight years. I thought I’d retire at 30. But I played 11, and now I’m 34.

“NFL Man of the Year … I never felt deserving of it. I am not the best person in the NFL. I never want to get up there promoting myself as some infallible person. I was very honored. But I was also conflicted that people saw me as this community service guy, not a player. Nobody saw me as the player I was in my prime. I don’t want to be known as Community Service Guy; I want to be known as a guy who busted his ass for 11 years at his craft. But I do appreciate the fact that people saw that I played for free for one year, that I was part of a group that built 61 wells for people to get fresh water in Africa, and that we’ve got 220,000 people drinking from our wells. I will not downplay that stuff. But I am not some angel, believe me. I don’t have a brand. My brand i

“Retirement is interesting. It is something I feared for a long time. It is an existential crisis. I’ve been doing something since high school, working toward a goal. I fantasize about crossing the threshold, but at the same time it’s something you can be deathly afraid of.

“I am excited about the next phase of life. I’m launching a digital media company. I will have my own pod. I’m just excited about being able to control the narrative. I like to create. Maybe I’ll work at a network. Whatever I do, I’ll be me.”