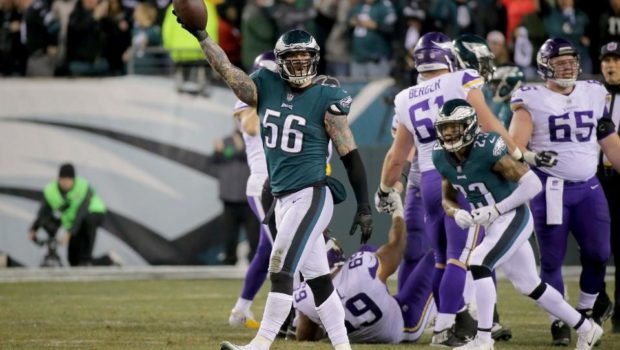 EAGLES CHRIS LONG TO FOX’S LAURA INGRAHAM: WHY ARE BIASED ANCHORS ONLY QUALIFIED TO TALK POLITICS?

Laura Ingraham went after James and Kevin Durant, who spoke up about a lack of political leadership in the U.S., telling the athletes to “shut up and dribble.”

The defensive end, who donated all of his 2017 salary to charity and supported teammate Malcolm Jenkins in his demonstration against police brutality and social injustice during the national anthem, fired back, pulling images of celebrities and sports figures who have appeared on Fox News to talk about political issues.

People such as Fabio, Chuck Norris, Jon Voight, Kid Rock, Bobby Knight, Ted Nugent and Curt Schilling. Knight and Schilling, of course, come from the world of sports, same as other Fox guests such as Caitlyn Jenner and Johnny Damon.

“The point is, what’s the prerequisite for who can talk politics?” Long wrote. “So, Fox News folks who agree with Laura … you okay with these segments? And if you reply, ‘stick to sports,’ you should probably tune out of Fox News because they’ve got karate guys talking climate change on there. (Which I’m cool with … it’s his right.) Unless it’s just about you needing to feel like you’ve got control of athletes like LeBron.”

Long also took issue with one user who mentioned the agendas of other cable news networks.

“EVERYONE FOLLOWS AN AGENDA,” Long wrote. “The conversation pertains to shutting down athletes speaking on politics or social issues based on some lack of merit, yet giving Fabio a platform.”

In a statement, Ingraham denied any “racial intent” in her remarks about James and Durant, saying the “shut up and dribble” phrase was a riff off her previous work and a formulation she has used for 15 years.

“If pro athletes and entertainers want to freelance as political pundits, then they should not be surprised when they’re called out for insulting politicians,” she said in the statement. “There was no racial intent in my remarks; false, defamatory charges of racism are a transparent attempt to immunize entertainment and sports elites from scrutiny and criticism.”

In her Thursday night commentary, Ingraham had questioned the educational qualifications of Durant and James.

“Must they run their mouths like that?” she asked. “Unfortunately, a lot of kids — and some adults — take these ignorant comments seriously. Look, there might be a cautionary lesson in LeBron for kids: This is what happens when you attempt to leave high school a year early to join the NBA. And it’s always unwise to seek political advice from someone who gets paid a hundred million dollars a year to bounce a ball. Oh, and LeBron and Kevin: You’re great players but no one voted for you. Millions elected Trump to be their coach. So keep the political commentary to yourself or, as someone once said, shut up and dribble.”